“We had to do something that would really make us stand out from the crowd.”

Love marshmallows? We thought so. You’ll be excited to know that 240Sweet is taking the world by storm offering over 150 gourmet flavors of marshmallow treats. Yum! 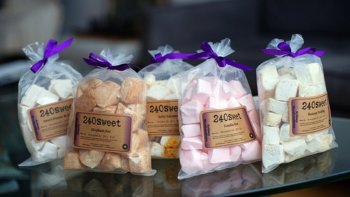 240Sweet was a long time cooking. Since the 1980’s these girls have been hard at work! Chef Alexa Lemley and sales exec Samantha Aulick are the third generation of their family to operate the family catering business. They began working in the 1980’s, as teenagers, and took over officially in 2006.

How did 240 Sweets develop into the premier marshmallow maker? As a way to thank their catering customers, they gave marshmallow treats  as gifts. The treats were unusual and unexpected, and requests for more marshmallow treats began to pour in.  Thus, hundreds of marshmallow sweet-treat concoctions, also known as ‘puffs’, were born! 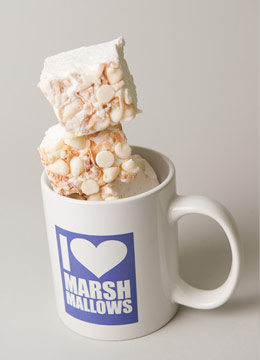 These artistic lovelies not only share their yummy puff creations with the world, but provide insider recipes and tips to their patrons and potential customers alike.  Based in Columbus, Indiana, Alexa and Samantha are reaching the far corners of the state and the nation by stamping their goodies with a product seal of all-natural and organic ingredients.

Urbanette Magazine: 240sweet is a great name!  What does the 240 represent?

Samantha Aulick: 240sweet is the soft ball stage of beet sugar. We boil the marshmallow mix to 240 degrees when we make them.

Urbanette: When you think of sweets or treats, one doesn’t typically think of marshmallows. How did ‘marshmallows’ of all things become your choice of gift to your catering clients?

Samantha: We are the third generation to operate the family business. When Chef Alexa’s father retired, we needed a way to show people that our style was a little different than his. We prefer a more French/Asian style of flavors. We also were hit hard with the recession. Companies we had served for 40 years were laying off people and canceling their holiday parties. We had to do something that would really make us stand out from the crowd. So we looked to Martha Stewart’s website for ideas and found her recipe for vanilla marshmallows.

We made the first batch and then began experimenting with flavors like Lemonade, Thai Chili, and such. We dropped off menus for party platters with baggies of marshmallows attached to nail and hair salons in our area. We figured: Who had discretionary income and would benefit from conversation starters? It worked. People ordered our “new” style of foods and then began asking to order marshmallows. We gave them away for about a year!

“We had to do something that would really make us stand out from the crowd.” 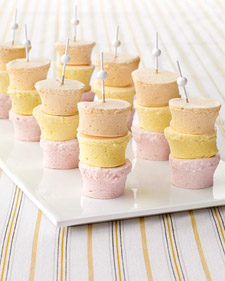 Urbanette: Obviously, your marshmallow concoctions differentiate your business from your competitors – what are other characteristics make your business unique?

Samantha: We use local, all-natural and real foods in our marshmallows. For example, we use real organic strawberries in the Hoosier Strawberry puffs–not flavoring. For the Hoosier Strawberry, we also use dehydrated strawberries in the powder on the outside. That makes a big difference in flavor. We often hear from people who say things like “I don’t like marshmallows” until they try ours.

Urbanette: In regard to your “made in US” product stamp, why is that such an important factor for your business?

Samantha: We use as much Made in America packaging as possible. It is important to us to support American businesses. All of our ribbons, labels, and boxes are made domestically–better for both the environment and the economy. We even downcycle our “Made in America” office paper–along with other paper to use as packing material.

Born and raised in Texas, Shelly is currently studying to receive her Master's Degree in Publishing at the University of Houston - Victoria.  Shelly is a writer for Urbanette Magazine, and loves "everything it is and all that it offers our readers, and to me personally". She is passionate about life, family, friends, her maltipoo, Truman. She is a lover of all things culinary and the arts (13 year veteran of ballet).