It was a downpour in New York City that morning. Giant wet drops of monsoon-like rain, coating the concrete runways of the city, leaving Fashion Week more damp and frizzy than poised and refined. Hearst Tower erupts from the corner of 57th and 8th, diamond cut and regal against the signature skyline. The home of such publishing powerhouses as Cosmopolitan, Elle, O, and Bazaar, there is no slowing down due to rain.

In the building’s cafeteria, the rain is pattering against the thousands of glass panels. Steel support beams reach for the heavens, gleaming in the artificial light. Men and women in suits more expensive that most of the city’s rent prices make their way to the Starbucks-stocked cafeteria. Jill Filipovic takes a sip of her tea and laughs. “I guess coming into work isn’t so bad when there are shirtless male models there to greet you.” She laughs again. 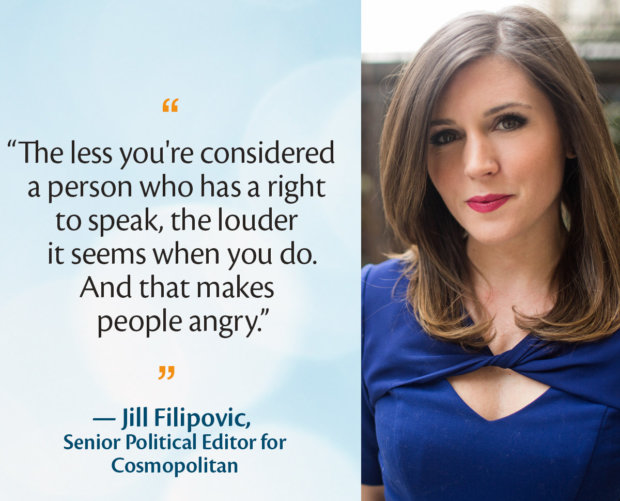 Filipovic is candid, like the older sister you never had, who you wished had told you that dating that guy who had a dragon tattoo on his back wasn’t the best idea. The cool older sister that you went to at age thirteen because you had no clue about sex and you know she’ll be real with you. She’s genuine, and her tone of voice reassures you that if she didn’t believe what she was saying, she wouldn’t have told you. You never have to worry that what she’s telling you is simply to hear herself talk; in all things, she finds a poignant idea to mention, that you never knew you needed to learn about until just then.