The Complete Travel Guide to Belgium

A Visual Tour of Belgium

Bringing you the very best of Belgium – strap in for the ride!

Brussels is a large city with many areas to explore. It’s a French-speaking city, but pretty much everyone in Belgium speaks English, since they’re forced to learn it in school, and all the American movies shown in Belgium are subtitled (as opposed to dubbed, like the rest of Europe). 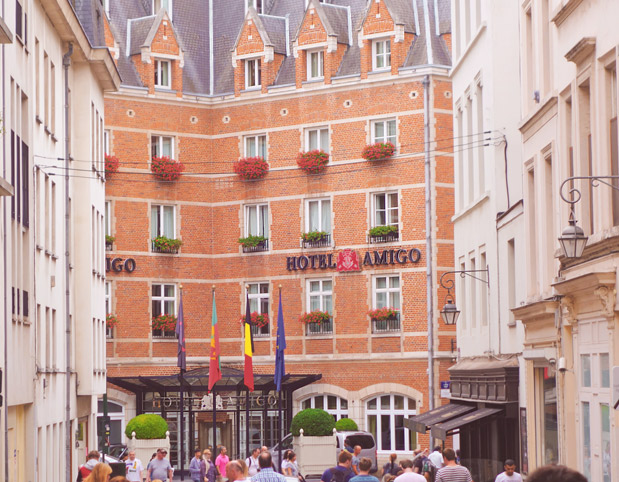 Hotel Amigo, in the old/downtown area of Brussels, where the Leonardo DiCaprio film Total Eclipse was filmed

We stayed in the touristy old “Grand Place” area, which was gorgeous. Our tour guide mentioned that she recommends that people stay uptown, since many who stay in the old town never leave that area, and never fully experience Brussels. And she has a point. The old town has everything you could ever need: plenty of shopping, restaurants, bars, chocolate shops, beautiful architecture, etc. What it also has is a lot of tourists.

Downtown Brussels is beautiful and, during peak season, packed 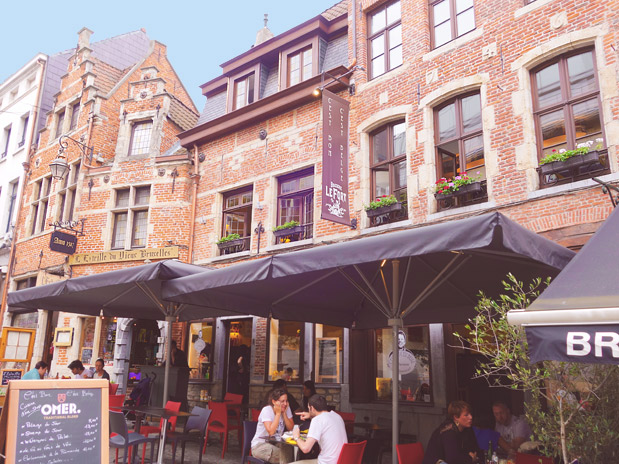 Get a coffee or beer on Rue Saint-Boniface, which is a cute street with many great bars and lots to look at. 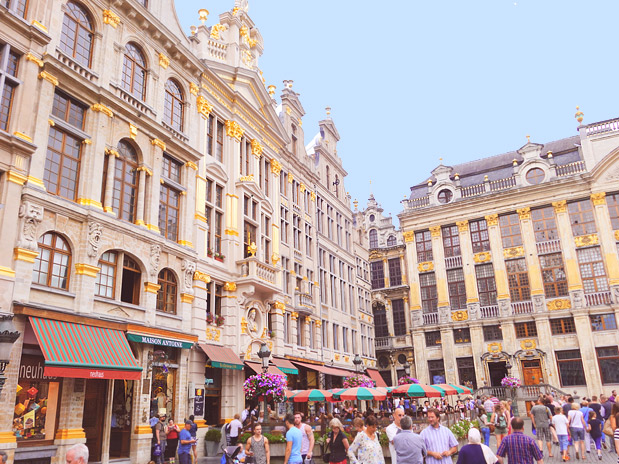 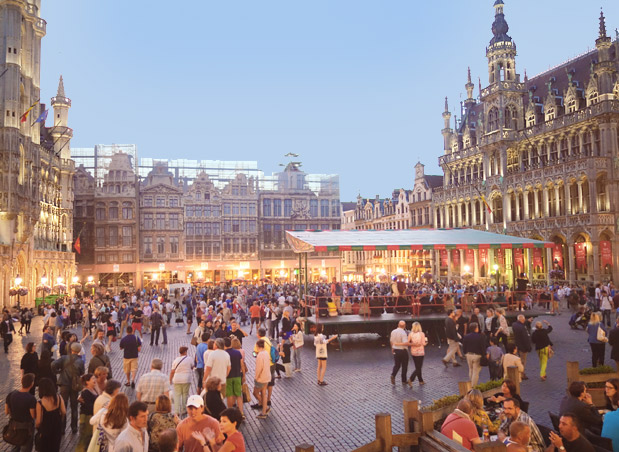 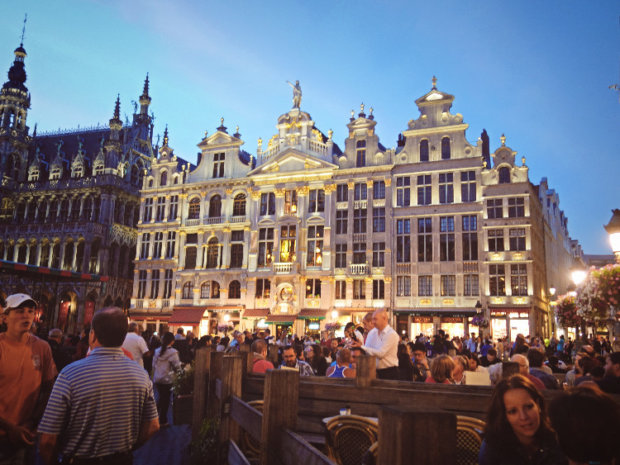 The Grand Place is still bustling at night

There are many beautiful public spaces in Brussels, from gardens with medieval buildings around them, to squares in the center of town that get lit up at night, to a giant park that rivals Central Park. If you want to go out at night, check out Rue Du Marché au Charbon (not to be confused with Rue Du Marché), which has a great nighttime social scene with street cafés, spots to go dancing (like Cartagena Salsa Bar, which is a lot of fun), and not many tourists.

A garden in Brussels on the way to uptown

Forget Banksy, Brussels is the home of true street art. It’s also the home of the first cartoons. You’ll find them in combination all over Brussels. Interestingly, every one of the over 40 giant murals around Brussels has an ode to the area worked into it. For example, if it’s on the side of a building, in the painting will be buildings or sculptures that are located in the same area, and other famous Belgian creations, like TinTin or the Smurfs. 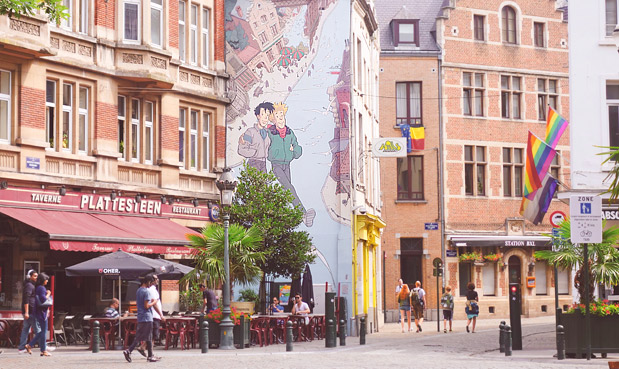 Street art featuring TinTin. Buildings in the art match the street it’s on. 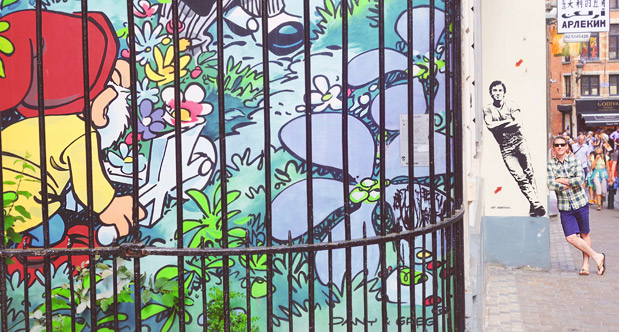 My husband mimicking the street art, with a massive Smurfs mural in the foreground. 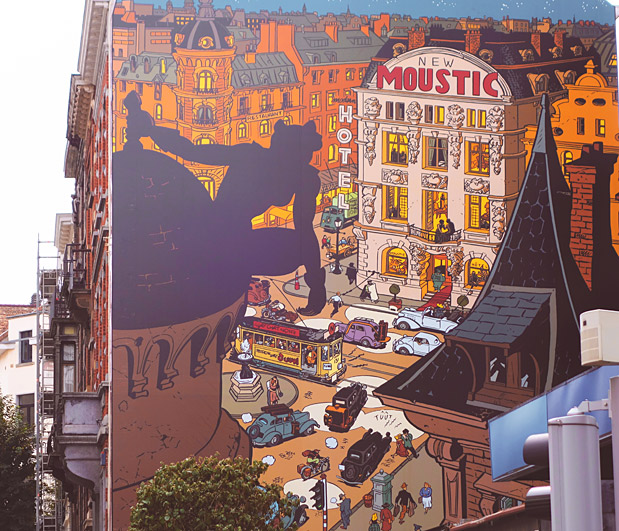 If you want to escape the crowds, grab a taxi (or a bicycle, if you’re fit) and head uptown. The Chatelain area is the nicest part of uptown, and the area you should head to first.

In Upper Town you can shop for antiques at the Grand Sablon, gape at the monumental Law Courts building, visit the sumptuous Royal Palace, stroll around the world-class Fine Arts Museum, tour the elegant Belgian Parliament, or marvel at the Art Nouveau architecture along Ravenstein Street. Upper Town is a big area with lots to see, so set aside at least two days to explore this neighbourhood in detail.

And ask your hotel to get you a Brussels Art Guide – a thick red pocketbook filled with information about the hundreds of art galleries in the city. Some are in townhouses, and some in modern spaces. Check out as many as possible, but remember that most are open from Wednesday or Thursday to Saturday, after 1pm. The guide will fill you in on all that. 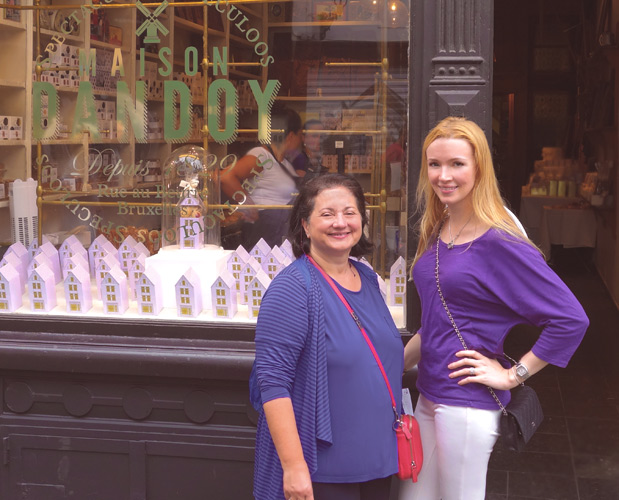 With Paquita, our fantastic tour guide

Oh, and I highly recommend taking a tour with Paquita from Bus Bavard. She’s hyper knowledgeable and fun, and will give you a whole new perspective on Brussels. She’ll open up a whole other dimension to the city that you wouldn’t have otherwise experienced.

Is Any Plastic Safe?
Read