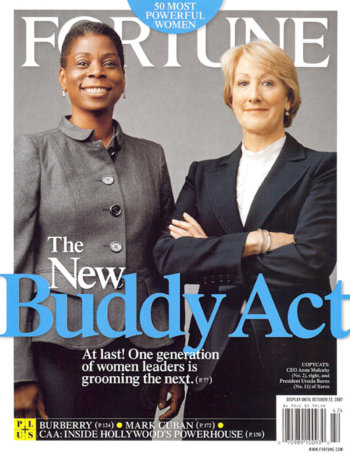 “You have to have a very strong opinion with some facts and data to stand it up, you have to prove that you are right more times than you are wrong, and then you better walk into the room with something to say because otherwise you don’t really add a whole lot of value to the group.  So if you are going to be in the group, I want you to actually come in … and have an opinion. And I don’t mean just opinion like, ‘I like blue or I don’t like blue.’ This is, ‘We have this problem. Here is my take on the problem, here’s what I’ve learned. My experience is telling me this and this is how I would approach it.’” – Ursula Burns

Ursula’s story is a true American dream story. Burns was raised by a single mother in the Baruch Houses, a New York city housing project. Both of her parents were Panamanian immigrants. Burns worked her way up from a lowly intern at Xerox, to executive assistant, and now serves as Chairwoman and CEO of Xerox. Incredible, right? As such, she is the first African-American woman CEO to head a Fortune 500 company. She is also the first woman to succeed another woman as head of a Fortune 500 company, having succeeded Anne Mulcahy as CEO of Xerox. She serves on numerous professional and community boards, and is a mentor to many. In 2014, Forbes rated her the 22nd most powerful woman in the world. Rightly so!