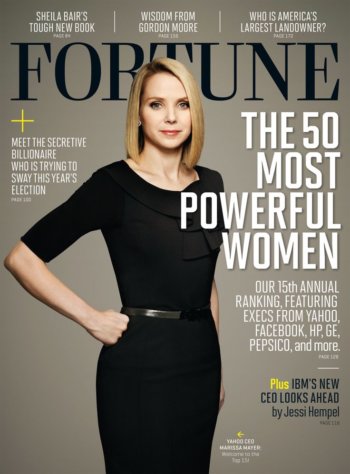 “I always did something I was a little not ready to do. I think that’s how you grow. When there’s that moment of ‘Wow, I’m not really sure I can do this,’ and you push through those moments, that’s when you have a breakthrough.” – Marissa Mayer

As a child, Mayer was “painfully shy”. In high school, she was on the curling team and the precision dance team, and excelled in chemistry, calculus, biology, and physics. She took part in extracurricular activities, becoming president of her high school’s Spanish club, treasurer of Key Club, captain of the debate team, and —get this— captain of the pom-pom squad! Really. They were state runner-up. She also worked as a grocery clerk during high school. Always the overachiever, while studying artificial intelligence at Stanford, she danced in the university ballet’s Nutcracker, was a member of parliamentary debate, volunteered at children’s hospitals, and helped bring computer-science education to Bermuda’s schools. Oh, and somehow still had time to get honors grades.

Marissa Mayer was Google’s first engineer, a Stanford University alumni with a specialization in artificial intelligence who would eventually be responsible for some of Google’s most recognizable achievements. She was instrumental in developing aspects of Google’s user interface, including its recognizable search page, but was also a critical developer for Gmail and Google Maps. While Mayer was working at Google, she taught introductory computer programming at Stanford and mentored students at the East Palo Alto Charter School. She is now CEO at internet tech company Yahoo!, which the Wall Street Journal notes comes with a hefty compensation package valued at $42.1 million a year. From pom pom squad captain / grocery clerk to shaping the way people use the Internet: You go, girl!