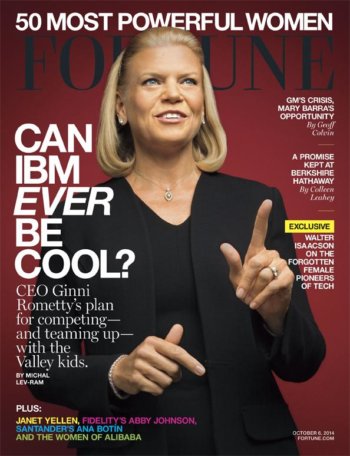 “I learned to always take on things I’d never done before. Growth and comfort do not coexist.” – Virginia Rometty

Once the president of her sorority, and now the CEO of IBM, Rometty has been a practically annual fixture in finance and business magazines’ “Most Influential” and “Most Powerful” lists of notable business people. Her more than 20 years with IBM saw her play an instrumental role in revitalizing the tech giant at the beginning of the century with a transition from hardware to tech services.

Rometty also holds the distinction of also being the first female CEO in IBM’s century-long history. She has been named to Fortune magazine’s “50 Most Powerful Women in Business” for ten consecutive years, ranking #1 in 2012, 2013 and 2014. An inspiration to women and men alike, she (and the movie Legally Blonde, of course) reminds us that hard work and determination do pay off. Oh yes, and it’s worth noting that she (like I, and many other modern women have) decided not to have children.