Why do six year-olds think of themselves as sex objects? Why do we?

Did the title of the article immediately grab your attention? Chances are that it did. Yes, sex sells. The very word is enough to make us curious, and want to have a peek at the concerned advertisement, book or film.

Is there something wrong with being interested in sex? No, absolutely not. It is a natural urge and a beautiful way to express our love for someone. It is also nature’s way of ensuring propagation of life itself. But when a healthy urge turns into a worldwide obsession, then it is time to ask ourselves whether all is well with our collective psyche.

A recent study performed on 6 to 9 year old girls, reveals a rather disturbing trend. The study showed that girls as young as six years, have already not only started thinking of themselves as sex objects, but actually want to be viewed as such.

Christy Starr, the study’s lead researcher, says: “It’s very possible that girls wanted to look like the sexy doll because they believe sexiness leads to popularity, which comes with many social advantages.”

A recent study performed on 6 to 9 year old girls, reveals that girls as young as six years, have already started thinking of themselves as sex objects.

Not all the girls picked the sexy doll though. Some of the girls who were from a local dance studio, picked the non-sexualized doll, showing that being involved in other activities like dance and sports, leads to a better body image. The researchers stated that “It’s possible that for young girls, sports involvement increased body esteem and created awareness that their bodies can be used for purposes besides looking sexy for others, and thus decreased self-sexualization.” 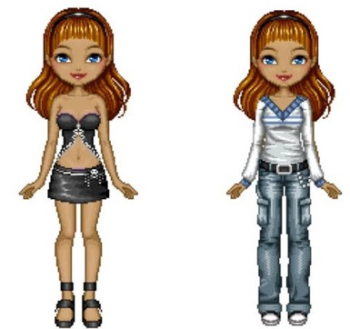 The study also concluded that girls who watch a lot of TV and had mothers with self-objectifying tendencies, were more likely to find the sexy doll more attractive. On the other hand, girls who received maternal instructions during media viewing (read: girls whose media consumption is monitored by the mother and who received the right maternal guidance), were found to be somewhat protected from the tendency of self-sexualization.

But six year olds? Do they even understand what ‘sexy’ means? No of course, they don’t. They are only receiving and absorbing the signals that their family, the media and society is constantly transmitting to them. So why are we giving these signal to our children? In other words, why are we all so obsessed with sex?

One of the reasons could be that no matter how liberated and modern we may be in our outlook, we as a society still secretly believe that that the human body, particularly the female body, is sinful and needs to be covered – and that sex is bad and something to be ashamed of. So sex continues to be a forbidden fruit, even when it is so openly and abundantly available.

Our attitude towards sex varies between extremes. On one hand, we have the religious groups who label sex as sinful. On the other hand, there are people who portray it as something that is, well, glamorous and trendy.

Either we have people who will kill a person for having sex before marriage – or people who will ridicule you for not doing so. Sex is treated either as a heinous sin that will send you to hell if you enjoy it – or as something like a health tonic that everyone must have, as early in their life as possible. It is either repression or complete indulgence, instead of what it should be – an act of love between two consenting and responsible adults.

We recommend providing sex education for children as young as ten, and again, there is nothing wrong with that. But while we teach children how to have sex, we perhaps do not teach them how to respect it. Sex and marriage should be treated with great respect – one helps us procreate, while the other keeps the fabric of the society together.

However, perhaps this message is lost somewhere along the way. Instead of treating sex as something beautiful that brings together two adults to experience intimacy, society continues to either treat it as a shameful and evil necessity, or as something to be selfishly enjoyed and boasted about.

We’ve all heard about men who define success not by the lasting love they have for their partner, but by the number of partners they’ve have had. Popular heroes and even heroines in fiction, films and TV, are shown having numerous one night stands, as if that is a measure of one’s manhood or status.

It is one thing to use sexual imagery to sell condoms or lingerie – but quite another to use it to sell fries and coffee.

Our advertisements also make full use of our collective obsession with sex. While some advertisers rely on their creative talent to grab the viewers’ attention, there are other who chose the easy way out – yes, put a semi clad model in the picture, even when it is wildly inappropriate. It is one thing to use sexual imagery to sell condoms or lingerie – but quite another to use it to sell fries and coffee.

And then there are ‘reality’ shows like ’16 and Pregnant’. While it does focus on the problems of faced by teen parents, the show also makes teen pregnancy look acceptable, normal and almost glamorous.

So it should come as no surprise that even six year olds prize ‘sexiness’ over intelligence, character or talent. The question is whether we want our children to grow up in a world where a woman is judged not by her academic or creative achievements or her strength of character, but by her sexiness quotient?

If the answer is no, then we all need to take the right steps right away – teach our children not to glamorize sex but to respect it, and to teach young girls that character and talent rate above mere physical appearance. Above all, we need to take the responsibility of being the right role models for their impressionable minds.