My Experience Trekking in Nepal …as a Single Female

Join me on the epic journey through the highs and lows of the Annapurna mountains.

The trick is to focus on the ground. When all you can see is the path underneath your boots, the depth blurs into a solid, rocky, one-dimensional plane, losing all sense of ascent. Still, you can’t fool yourself completely. At 5,000 meters, the breath is ripped from your lungs, leaving hollow, deflated spaces in your chest. I breath deeply, as deep as I can, and it feels like there’s not enough oxygen in all of Annapurna to fill my lungs. 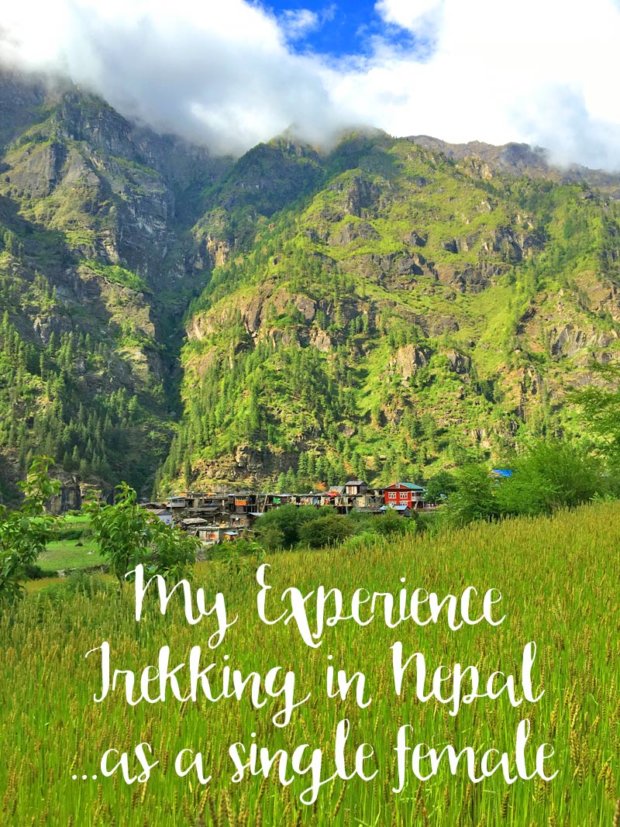 My 13-day trek on the Annapurna Circuit in Nepal was the most physically demanding thing I’ve ever subjected myself to. But it was also the most surreal. I started in Daraphani at 1,860 meters, went through Thorong La Pass at 5,416 meters, and ended in Jomsom at 2,720 meters. I had a backpack filled with thermal wear, a raincoat that made me look like Quasimodo, walking poles for my weak knees, water tablets, snacks, my Kindle, and my laptop (for which I received plenty of teasing).

On my first day in Daraphani, I awoke to the startling discovery that I had altitude sickness, or at least something that fiercely resembled it. At only 1,860 meters, everyone tried to convince me that this simply wasn’t possible. But the symptoms spoke for themselves… loudly. I was dizzy, my stomach was angry, my head hurt, and the simple task of putting one foot in front of the other was becoming a new personal challenge. I always did enjoy proving people wrong.

I set out for my first official day of trekking the next morning at 9am. The unforgiving ascent and the weight of my backpack were making me think twice about my physical strength and my mental fortitude. I thought of all the thousands of trekkers that had come before me; some soft from desk jobs, some older and frailer. I thought of Cheryl Strayed; her hefty backpack and gallons of water roughing it all the way through the Pacific Coast Trail. Ten minutes into the trek couldn’t be enough to overpower me with doubts. All the same, I started doing mental inventory of the contents of my backpack to decide what I could live without. 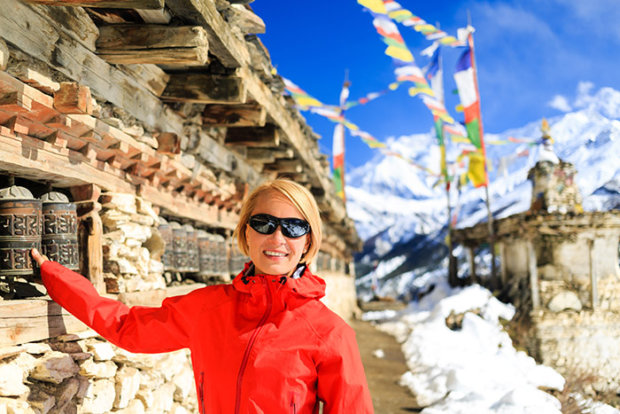 At the next town, I ran into my first trekker, a Russian-Israeli woman also traveling alone. We quickly fell into step, and in the fashion of all travelers, started speaking without the bother of names. We would become trekking mates for most of the rest of the journey.

Inna was an experienced climber who often chose vacation spots based on the quality of the local rocks. She was stronger than I was, more prepared, and infinitely generous. She shared with me the contents of her “kitchen;” a bag filled with snacks including a porridge called tsampa that had both the consistency and flavor of cold mud, but was an epicurean blessing when I was starving and the next town was still two hours away. 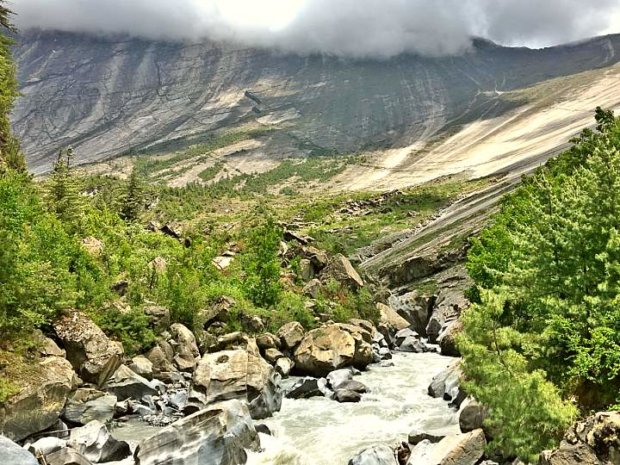 When we had a day of seven to nine hours of mostly uphill walking, she was encouraging. Our mantra was an Israeli phrase she had taught me, “We are in clouds!” The phrase has the connotation that we’re euphoric, but in our case, it was a literal translation.

The hike was exhausting in ways that were previously unknown to me and gave me pain in places that I just didn’t have the motivation to examine. I dreamed of the Lake at Pokhara, and good food. One time I thought I saw the outer corn husk of a tamale on the trail and it occurred to me that murder would be a viable option to get my hands on one.

The Silicon Valley girl that still resides somewhere deep inside my soul made a small scream and tried to call an Uber out of there.

As we ascended higher, the scenery changed. From lush forests and grassy pastures, the landscape slowly gave way to rocky passes, impossible cliff faces, and stunning views of snow-capped peaks. It was the kind of place that made you whisper. Sometimes I would get so absorbed in making it up the next slope without tripping over my own feet that all I could see was the dirt path in front of me. When I looked up, it was often with renewed wonder, as if I had suddenly been transported from the fantasy burrito I had been devouring to a landslide painted gold in the Himalayan light. All of a sudden, the tsampa didn’t taste so bad anymore. 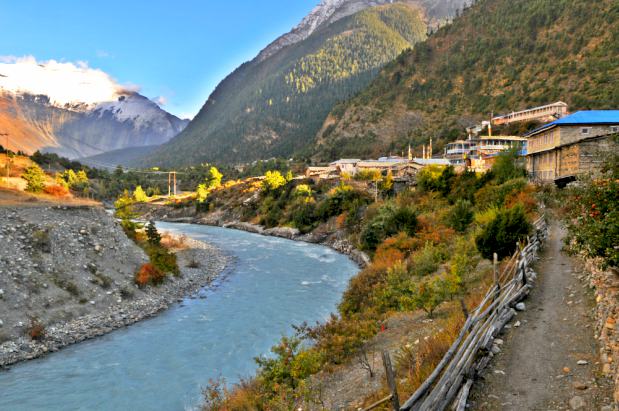 Inna and I began to play a sort of game. The mountains were so immense that it was impossible to know what was around the next bend. Whenever we could see the curve of the trail around the mountain, our mental kinetic energy shot around the bend to guess at the next sight and we would say “I wonder what we’ll see next!” Our imaginations never did quite live up to the impossibly grand cliff face shrouded in ephemeral cloud or the steep valley cut through by time, water, and glaciers. The views took away what little breath you had available and left you standing silent and numb to the weight of your backpack or the soreness in your legs. It was the best anesthesia.

On the fourth day, when we reached Lower Pisang at 3,200 meters, we were greeted with the usual “Namaste” and the news that there was no electricity in the entire town for the foreseeable future.

The Silicon Valley girl that still resides somewhere deep inside my soul made a small scream and tried to call an Uber out of there. Somewhere she’s still wandering around in the dark recesses of my mind, holding her phone up to search for the best WiFi signal. But at that moment, trekker me took over. I swallowed and contented myself to a night of staring at mountains and reading The Snow Leopard. 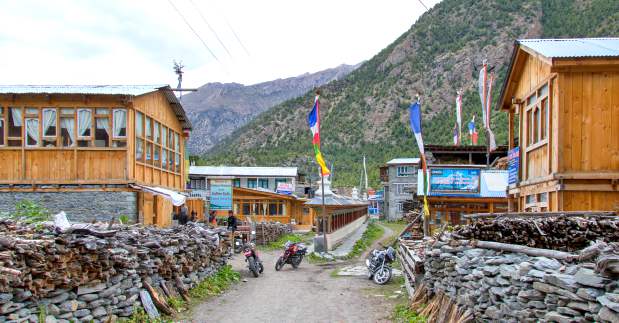 On the fifth day, going from Lower Pisang to Manang, Inna and I decided to split up for the day. She wanted to take a more scenic route that featured a harder climb and better views. Judging from my extraordinary struggle of the last few days, I decided to take the road most traveled. Along the way I shared a cup of what tasted like sugar with a bit of tea mixed into it with a Nepali-Tibetan man named Karma. Karma comes in all shapes and sizes, and this one wore an electric green Slipknot hat. I desperately wanted to subject him to the musical renderings of Psychosocial. However, with no wifi available, I thanked Karma for the sugar, and went on my merry way.

Karma comes in all shapes and sizes, and this one wore an electric green Slipknot hat.

At one point, I walked up a hill with a sharp wind. The wind whipped away the low-hanging clouds like a curtain and I saw the snow-capped peaks of mountains arranged before me as if I had stumbled upon a private peep show. The were grand and vulnerable and self-assured. The snow on their peaks was the source of the clear stream running beneath the old wooden bridge I stood upon. They were close enough to touch, but I knew without trying that they were mirages that would move further away the closer I got. I could never get close enough to something so impossible. 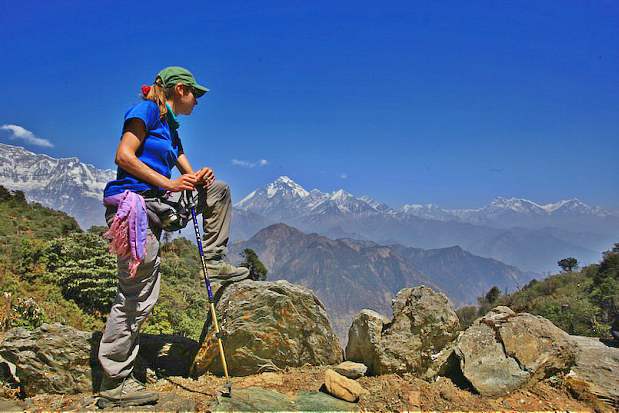 I heard laughter and was startled to find that it was coming from me. I shrugged off my backpack and leapt around, leaving myself breathless and heaving from my small happy dance. I sat on a rock and stared and marveled and was reminded of a quote I had read in The Snow Leopard: “How wondrous, how mysterious! I carry fuel, I draw water.” The statement is self-sufficient and self-sustainable. It is all it needs and can lend itself to all situations. I carry fuel, I laugh at mountains.

10 Hacks to Help You Get Better Sleep
Read