We talk with the uber-talented star about priorities, celebrity, her inspiration, and living in NYC.

This interview is one Urbanette had previously published, but since it is such a powerful interview, I felt it was worth revisiting.

When Hilary Swank walks into a room she commands attention. The star is uniquely striking and abundantly talented. When you see her in person it’s obvious why in she is named one of People magazine’s “50 Most Beautiful People.”

For a famous actress who has earned two Academy Awards, two Golden Globes and an Independent Spirit Award, Hilary is surprisingly humble and down-to-earth. Perhaps this has something to do with her trailer-park upbringings in Bellingham, Washington and the fact that she succeeded through hard work and talent — in a Hollywood where success frequently comes through family connections and industry contacts. 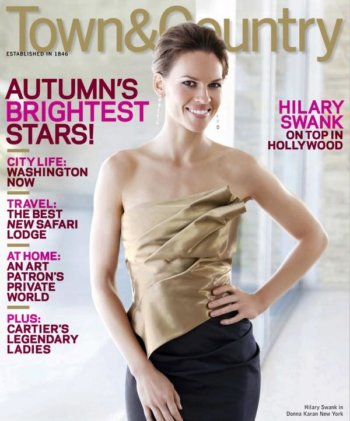 For starring in her breakthrough film, Boys Don’t Cry, for which she won her first Oscar, she earned a meager $3,000. Hilary won the lead role of Brandon Teena after three hundred other actresses had been considered and rejected over the course of three years.

Hilary works hard for all her roles. To prepare for Million Dollar Baby, for which Hilary won her second Oscar, she radically overhauled her body by enduring three months of intensive physical training. “I had to eat about 210 grams of protein a day, so I’d drink egg whites and protein shakes and flax oil.” She nearly died during her training from potentially fatal blood poisoning. “I was in a bad way. It got to the point that where I couldn’t walk.” But Hilary shrugs it off, as if all actresses would go through this kind of torture. “My job was to do my best to look like a boxer.” And that she did.

I first met Hilary Swank at the Tavern on the Green in New York City. We were at an awards ceremony and she sat down next to me, said “Hilary” and stuck her hand out. My first reaction was to wonder how she knew who I was and there was a bit of confusion until we realized that we shared the same name — and spelled it the same way! We ranted for a bit about how we both have to listen to Hillary Clinton jokes, just because we have the same first name.

Over the next year I saw Hilary at the Golden Globes, the Independent Spirit Awards and the Vanity Fair Oscar Party, and she always made a point of saying Hello. Now, at the posh Windsor Arms Hotel in Toronto, Hilary sits comfortably in a chair, her left knee propped against the table. She is wearing black boot-cut pants and a delicately lacy black top. She excuses herself and gets up to pour herself a cup of coffee at the buffet. She brings the cream back with her, but decides against using it. Instead she pours half a packet of “Raw Sugar” into her black coffee and delicately takes a sip.

Why You Can't Find Love -- and How To Fix It
Read