Jamaica. Exciting, provocative, colorful, unpredictable, and sometimes downright scary. If you habitually avoid the unexpected and seek the sanctuary of American food chains and a buttoned-down culture, then you’re better off in Florida. But if you live for adventure and spicy foods, this could become your favorite tropical getaway. 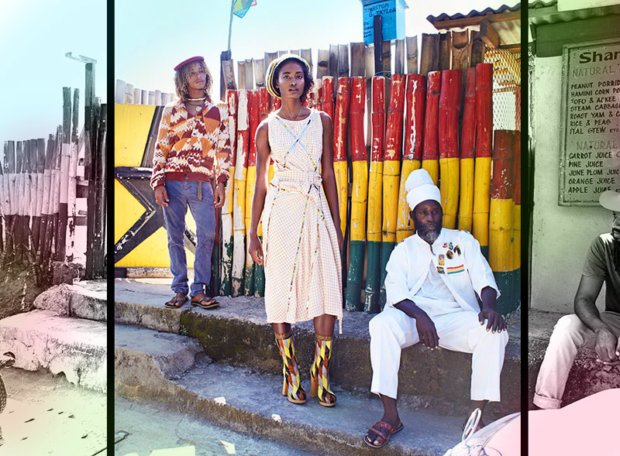 Jamaica’s rich history runs the gamut from pirates to plantations, from colonialism and slave revolts to proud independence. Today, the tropical island has become the land of relaxation, reggae and Rasta culture. Tourism now accounts for 45% of Jamaica’s (reported) foreign income, and I can see why. Thanks to the island’s warm, crystal blue water, teeming fish and gorgeous reefs, it is the perfect place to learn how to scuba dive or spend a relaxing day snorkeling. The adventurous can also go 4×4 off-roading through the jungle, take a river rafting trip to spot crocodiles, or hike to a secluded waterfall. If you can dream it up, you can do it here. From water skiing to Sea-Dooing to river tubing and horseback riding; it’s all available in Jamaica.

The minimum wage is only about $200 per month for full-time work, making it one of the poorest countries in the Caribbean. You might never notice the poverty if, like most vacationers, you travel directly from the airport to your hotel along the northern roads from Montego Bay to Ochos Rios, as this strip is lined with beautifully manicured golf courses and giant international-style resorts. 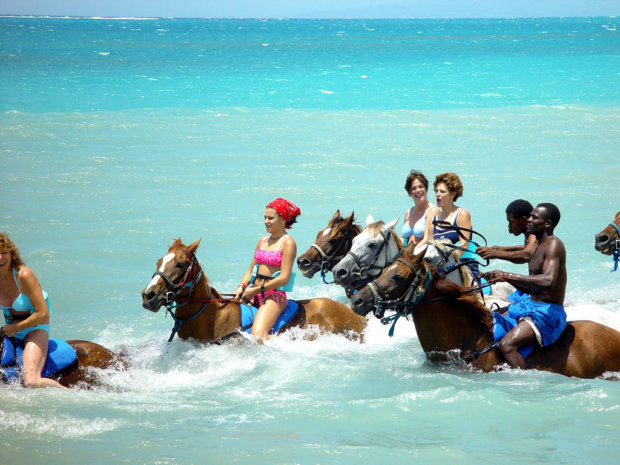 If you want to see the real Jamaica, you can rent a SUV (and make sure it has a spare tire, as the roads are filled with tire-popping potholes) at the airport and take a drive through the tropical mountains of central Jamaica, or tour the densely urbanized Kingston area, the resort-cluttered western coast, or the less-traveled lower portion of the island. Be careful, though, when driving at night, as goats and cattle roam not only the fields but also most of the roads, and it’s not uncommon to see animals get hit. 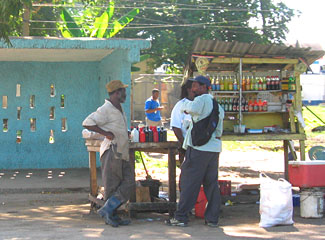 Planning a route in Jamaica is not a question of plugging point A and point B into Google Maps since what looks like a major road on a map is sometimes just a dirt track or, thanks to hurricane damage, doesn’t exist at all. Talk to the staff at your hotel before plotting out your journey.

Along the way, be sure to stop at some of the many roadside produce stands. The fruit they offer is wonderfully fresh and fragrant; there’s a world of difference in the flavour of the bananas and papayas at the supermarket back home and the ones you’ll be lucky enough to try here. Unless you’re a fan of food poisoning, avoid drinking tap water or eating meat and dairy in Jamaica. The jerk chicken or goat sold by roadside vendors is spicy, served with bread, and rolled up in foil, but can result in your vacation being spent in the bathroom, if you’re unlucky. 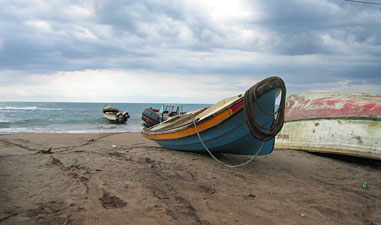 The Jamaican attitude is the epitome of the laid-back island lifestyle. Bob Marley and reggae rules, while the Rastafarian religion promotes smoking ganja for spiritual purposes.

A wise Jamaican told me the wistful story of a village fisherman who was visited one day by a stranger. The stranger told him that he could help him expand his business, and that in five years he could have ten boats, and in ten years he could sell his business and retire. He would have to work long and hard to build his fishing business into this empire, but its fruits would be plentiful. The fisherman responded simply, “Why would I want to do that, mon? I fish when I want to, sit around all day, smoke ganja and laugh with my friends. I already feel like I’m retired!”

If you’re looking for gorgeous beaches, this may not be the best destination for you, depending on where you’re staying. Jamaica has a culture of littering, and most of the beaches have so much litter that you almost can’t see the sand. No, really. 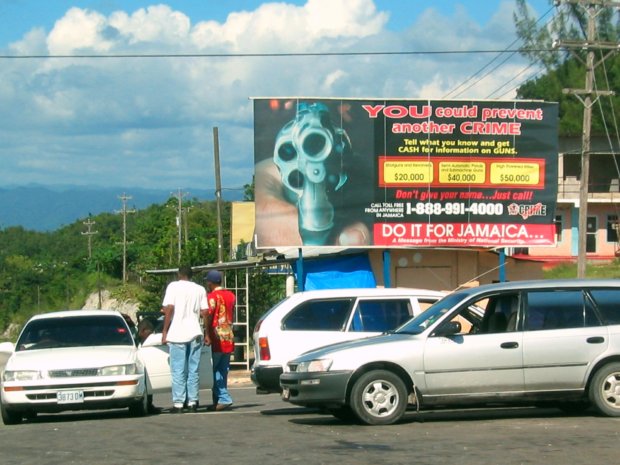 As you may have heard, for all its beauty and sensual pleasures, Jamaica is not the safest spot in the Caribbean. There are more than 1600 murders per year here, for a population of only 2.9 million. And, according to Amnesty International, more people are killed by police here (per capita) than anywhere else. Although marijuana and cocaine (two major Jamaican exports) are illegal, a great many people you meet in passing are eager to hook you up with your drug of choice. Leave your valuables at home because a quick peruse through TripAdvisor will enlighten you to just how many upscale hotel room robberies happen, and how vulnerable your in-room safe is to theft via master-key. 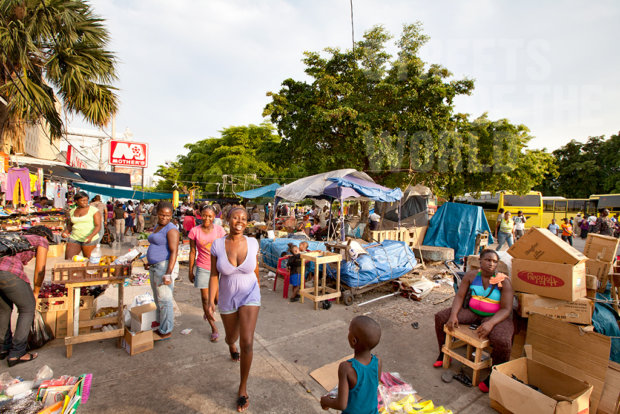 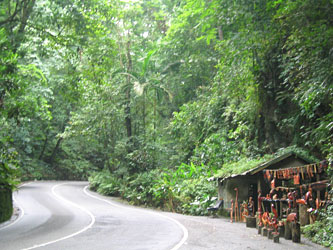 While most people are friendly and welcoming, it’s still advisable not to wander too far off the beaten path. It’s not unheard of for tourists to be shot at when they stumble upon a hidden marijuana crop. Growers are in a state of constant warfare with local authorities and the U.S. DEA, which operates here as well. We’re anything but shrinking violets, but we got a bit spooked after taking a detour in our rental car down a red dirt road and finding ourselves amid fields of marijuana bordering mansions the likes of which you’d be hard-pressed to match in Palm Beach or Beverly Hills.

Despite all the craziness that is Jamaica, it still tops many tourists’ lists for tropical vacation getaways. That’s thanks in part to the famously hip and exclusive group of Island Outpost resorts. Island Outpost owner Chris Blackwell used to own Island Records (Bob Marley, U2, The Cranberries, etc.), but sold the label to devote his attention to his resorts, which have become a magnet for well-heeled pop prodigies. 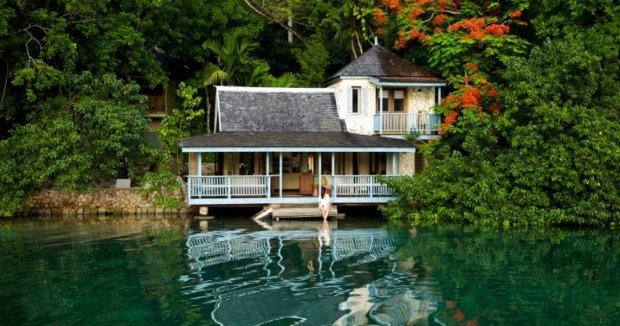 Island Outpost resorts are a draw for the well-heeled

While traveling in Jamaica, there are a few adventures that you should try not to miss.

A must-do adventure is the fascinating Jeep Safari Tour. Venture behind waterfalls and into swimming holes so secluded you can only reach them via the tour’s off-roading Range Rover. Lunch is provided, but make sure to request a plant-based meal in advance. You’ll also get to see 18th century ruins of a plantation that was destroyed during the famous slave rebellions. 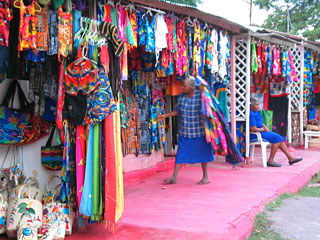 One of the most popular attractions in the Ochos Rios area is Dunn’s River Falls. For an awesome experience, book a guide and you’ll be able to climb up the 600 feet of cascading waters. It’s not only a place for challenge, but extraordinary beauty. At the top of the falls, you’ll find a small village, food and shopping.

Across the street from Dunn’s River Falls is Dolphin Cove. It is here that you can touch, swim with, or even kiss dolphins. There is also a hair braiding booth and a beach grill. Feel free to interact with the cove’s remarkably friendly birds and explore their jungle haunts. It’s a great place to spend the day, or a couple of hours in nature.

If you enjoy Reggae music, don’t miss the Zion Bus Line Tour, complete with dreadlocked driver. This adventure will take you to the birth and final resting place of Bob Marley in the village of Nine Miles, as your guide shares stories about the area and how young Bob grew up.

If you like cycling, then check out the Blue Mountain Bicycle Tour, and take a ride through lush tropical rainforest and coffee plantations. Catch the trails on horseback with Chukka Cove Adventure Tours. Bring your bathing suit, sun block, and a towel and be prepared to ride your horses in the ocean. The ride is three hours and you’ll have the time of your life–we promise!

Good-to-know: Chikungunya fever (commonly known as Chik V) is a mosquito-borne virus on the rise throughout much of the Caribbean, including Jamaica. Though the effects are not deadly (fever, rash, joint soreness), they aren’t pleasant. Most hotel rooms should have mosquito nets, but not all do. So bring your own mosquito repellant, and apply liberally!

Next up: Reviews of Island Outpost’s three resorts, a scary situation, and the location where 007 was created.

5 Signs He's Lying To You
Read