5 Ways to Help Your Man Look His Best

Ways to get your man to improve his fashion sense without cramping his style.

In the first couple of months after I first met my hubby-to-be, I must have donated 70% of the items in his closet. It wasn’t an easy task getting him into the store and convincing him that the Euro look is the way to go. He was used to wearing slightly ill-fitting American-style wide pants and he hates shopping with a passion, so most of his closet was a decade old. I had to (almost literally) drag him into stores, ignore his complaints, and act as his personal shopper. 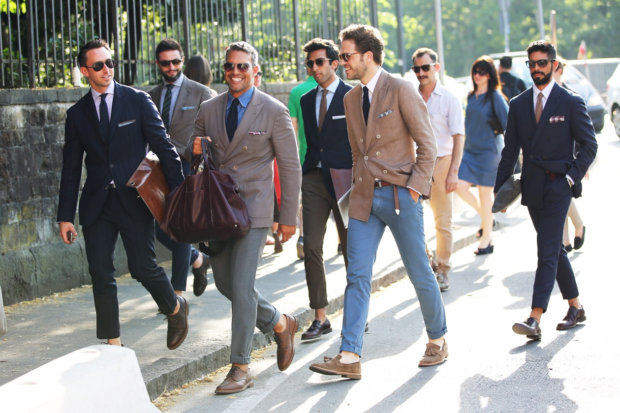 If your sweetheart prefers t-shirts over ties and doesn’t own a single pocket square, you’re not alone. Believe me, I’ve been there. Thankfully my hubby has made a fashion 180. However, the scenario is so common that a survey found that 85 percent of men who’ve been shopping recently said they dress primarily for comfort. However, the men that were surveyed go on to say if they were better educated about what looks best on them or how to create a distinct look, they would be willing to step out of their clothing comfort zone. That’s where you come in. There are several ways to get your man to improve his fashion sense without cramping his style.

Let’s get to the root of the problem first. Most men wear the same thing over and over again, not because they’re lazy but because they’re stuck in a rut. Approach the subject when it’s convenient for both of you. In other words, don’t plan on having a conversation about clothing while he’s watching the game. Start with something positive. Mention why it’s important to you that he dresses appropriately for certain events and say something like, “It makes me feel valued when you spend extra time getting ready for our dinner dates.” In my case, I pitched it as a way for him to appear more professional at work.

Meet in the Middle

Compromise is key in any relationship. What we wear is, ultimately, a personal choice. Allow his personality to shine through by looking at his current wardrobe and buying a few pieces that are better, higher-quality and more well-fitted. For example, I know my hubby typically wears darker colors (think black, gray and navy), so I’ll buy him classier pieces in the same shades. That way, he doesn’t stray too far from his comfort zone when updating his look.