The United Boy’s Club of America: Equality is an American Fiction

Equality and opportunity for all?? Not quite.

Unless you’ve been on a serious news-diet (and I almost wouldn’t blame you for avoiding all the bad news out there) for the past …well… forever, you’re aware of the extreme sexism that female politicians have to face. It’s an unfortunate truth; the general tone of misogyny found in American media is no less prevalent in the political arena. From Trump’s repeated and unapologetic vulgar snips at female candidates, reporters, and moderators, to the undertones in litter-liners like The New York Post, women in politics are far more likely to be subjected to inappropriate media scrutiny and criticism than their male counterparts. 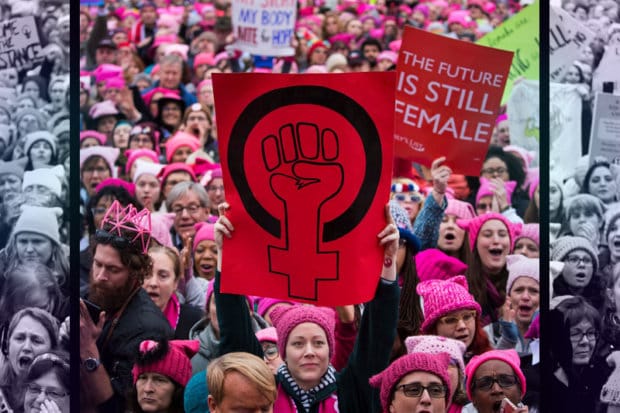 In the last presidential election, the New Yorker’s cover showed all the potential Republican nominees (but, interestingly, left out the already-announced –and now irrelevant– Carly Fiorina.)

America’s propaganda machine has always spread the “American Dream” fallacy that the United States is a free country founded on the idea of upward mobility and equality for all. But we all know that’s simply not true.

The USA has always had less upward mobility than Canada, Australia, and Europe, and yet “Movin’ On Up” is practically the national anthem. It doesn’t take a brain surgeon to see that the USA, its corporations, its media, its advertising, its political system is still controlled primarily by wealthy old white male trustfunders who’ve never had to struggle financially. And it makes sense that this group wants the rest of us to think we have the same opportunities as they do. The last thing they want is women and minorities fighting back and taking a larger piece of their power pie.

America is supposedly founded on the idea of opportunity and equality for all — but who are we kidding, really?

Take one hard look at how women, gay, and black people have been marginalized by the US government, and it’s glaringly clear that justice, empathy, and equality isn’t something that the American government has traditionally made a priority.

What about Obama, you say? It’s true that when Obama was in power, he made many attempts to remedy that, but was continually blocked by Senate Republicans. Not because their constituents disagreed with the changes Obama wanted to make, but simply because Obama is ‘on the opposing team’.

The American government is a major sausage-fest, even when the Dem’s are in the White House

After all, almost all other democratic countries have had multiple female presidents/prime ministers (including Pakistan — I mean, come on!!). But in the United Boy’s Club of America, women still hold less than 20% of congressional seats, and just over 10% of governorships.

In fact, America ranks 94th in the world for percentage of women in its national legislature. This should be humiliating to our government, as we fall just behind Kenya and Indonesia, and barely ahead of the United Arab Emirates. But then again, if they wanted more women in power, there would be more women in power. Not surprisingly, at the current rate of progress, it will take nearly 500 years for women to reach fair representation in government. And that’s not by accident…

There’s no doubt: America is not a world leader when it comes to equality.

This is an especially important issue, because various studies have shown that having more women in politics makes a significant difference in terms of the policies that get passed. Female legislators are far more likely to try to get progressive policy passed on issues like the environment, support for families, civil rights, education, health, labor, violence prevention, incarceration, and other important social issues.

Because of this, America falls short in legislation that benefits women, including paid maternity leave, which benefits us all.

How are women supposed to have a voice, or stand up for women’s rights, when we’re vastly outnumbered in every voting situation? In all types of positions of power, women continue to be largely underrepresented across the United States. I’ll save the almost non-existent representation of gay, atheist, black, and ethnic people for another article; that’s a whole other can of worms.

So what can we do to change this? Attend and organize more Women’s Marches. Educate yourself about all the subtle ways that the media and society tries to get women to internalize misogyny. Stand up to people who say sexist things. Speak up and ask for a promotion. Get out and vote for female and minority candidates (and bring friends with you). Maybe even consider running for office. Because it’s time for women to have their say.

Read more in the ‘United Boys Club of America’ series:

Tell us; do you vote in local elections? Have you ever voted for a female politician?

How to Make Your Relationship Fun Again
Read

How to Spot and Trap a Lumbersexual
Read