My Lavender-Scented Dream in Provence

I’d been waiting for this moment for years….

During our time in Provence we decided to stay at the five star Relais & Châteaux resort, Le Phebus. Located in one of the most beautiful regions of France, Le Phebus sits nestled into the rolling hills between Joucas and Gordes.

The seven hectare property was originally purchased in the 90’s by Xavier Mathieu’s family, who currently operates the resort and Michelin starred restaurant. After some heavy renovations to the historical property, Le Phebus became one of the most refined and elegant establishments in the region. With only 29 rooms and 4 suites, this charming resort manages to preserve a feeling of seclusion and intimacy. 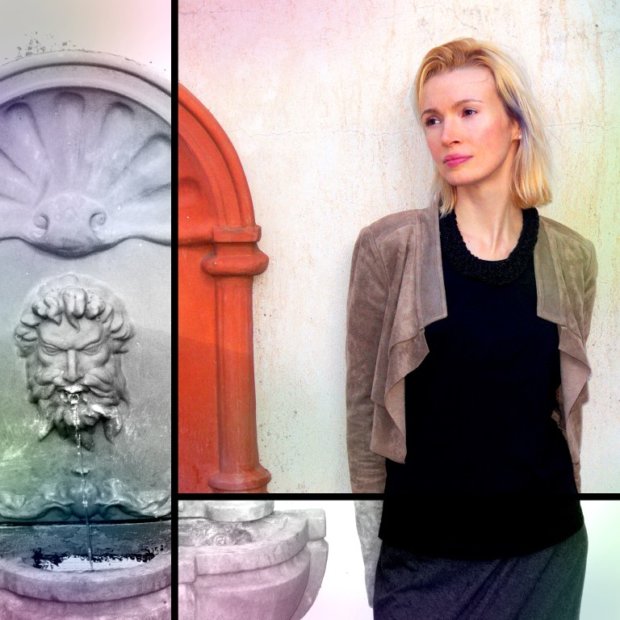 In our suite’s front courtyard

We tucked into the Grand Prestige suite, which is absolutely massive, and boasts a beautiful view of the rolling hills from its expansive terrace. Separated from the main property (2 min walk), you feel miles away from civilization. It checked all the boxes: a cozy king sized bed, high ceilings, a giant outdoor terrace where we can eat and lounge, a big comfy sofa and a large TV next to a fireplace so big you could sleep in it. I was in heaven! The walls are composed of beautifully carved white stone that adds warmth without sacrificing sophistication. It even had a charming fountain outside that sounded like a running stream. Simply put, it was heaven. 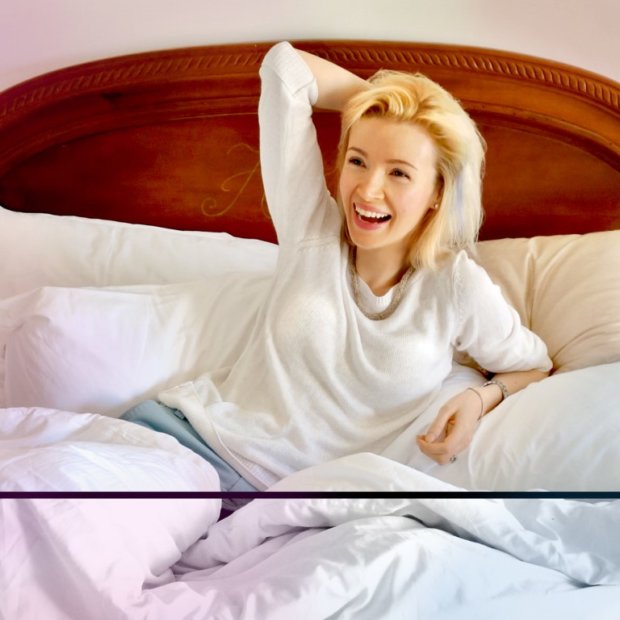 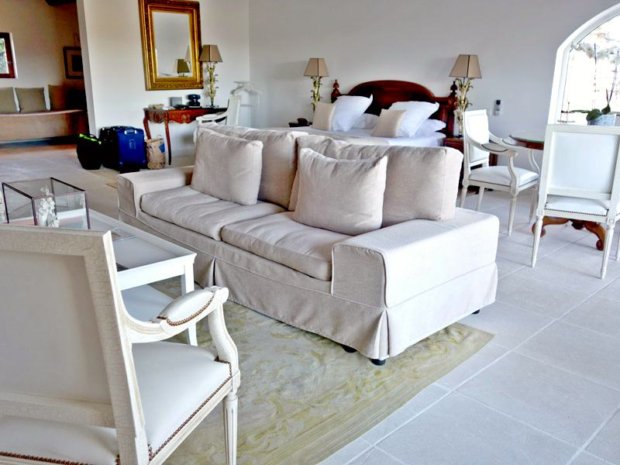 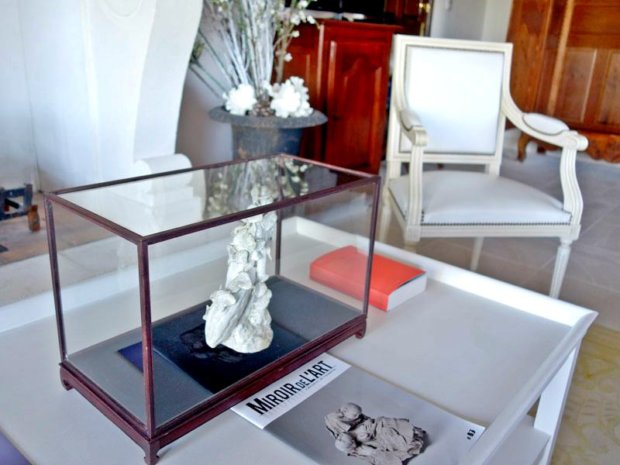 As excited as we were to be staying in such a beautiful setting, we were equally excited to try a tasting menu at restaurant Xavier Mathieu at Le Phebus, as we’d heard good things and knew we were in for something special. We chose to sit outside, with a view of the sun setting behind the rolling hills of Provence. I’ll start by saying that given the fact that we, and our friends, are vegan, we are always ever-so-slightly apprehensive about whether a chef is up to the task and will create something not only nutritionally balanced and filling, but also creative and delicious. But by the end of our first few courses, Xavier Mathieu had already cemented himself as one of the most creative chefs I’d ever come across. 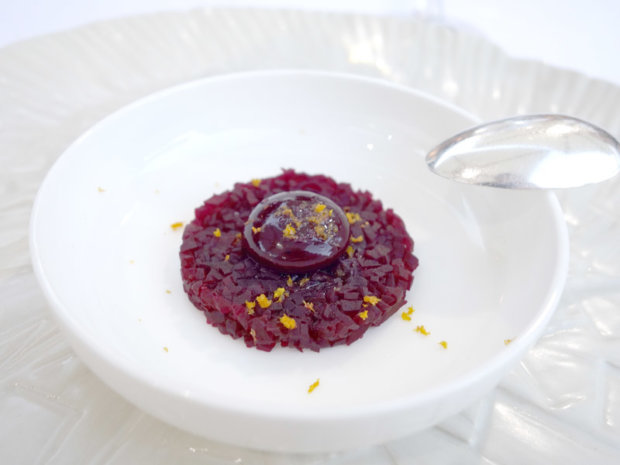 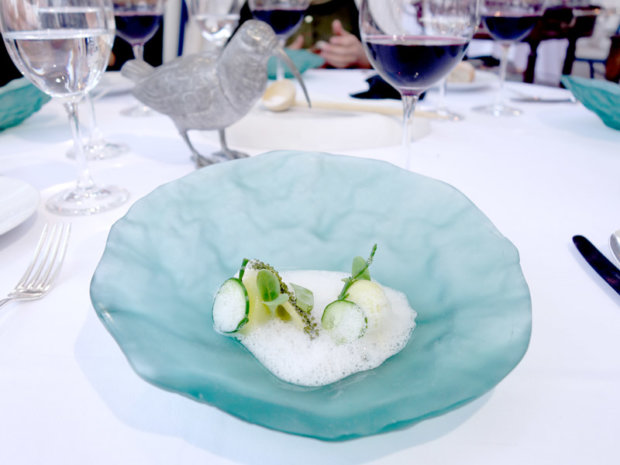 Over the course of three hours, we were serenaded by a medley of delicious vegan flavors. We started with a wonderful gazpacho, followed by smoked artichokes with local grains. Then on to a cucumber tartare with rice vinegar which tasted unbelievable refreshing. The main was polenta with local spelt that was lightly fried, accompanied by mushrooms and sorrel. Dessert was cherries with almond milk and caramel. The flavors and textures blew my palate away. There were tastes of the sea (algae foam), wonderful aromas, and colors that excited me as much as the taste did. In the end, it was one of the most impressive meals I’ve ever had. This trip was only just beginning, and it was off to a delicious start! 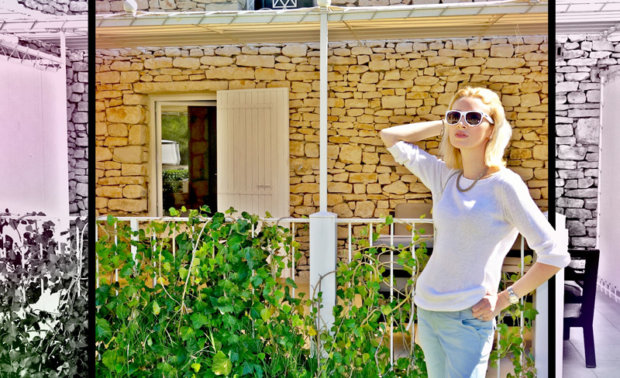 After a long day of exploring, drinking delicious wine, and soaking up the sun, there’s nothing sweeter than slipping into the spa at Le Phebus. Sitting just off the main building, there are twenty different treatments awaiting your arrival. After our couples massage, we took a dip in the heated swimming pool and jacuzzi, then chilled and read a magazine in the relaxation room. As I sipped a delicious organic tea, trying to extend the zen as long as I could, I had one thought in my mind: how excited I was to have found Provence — my version of paradise. 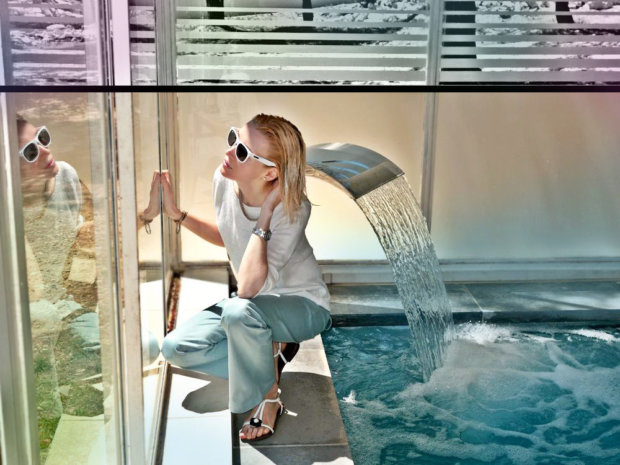 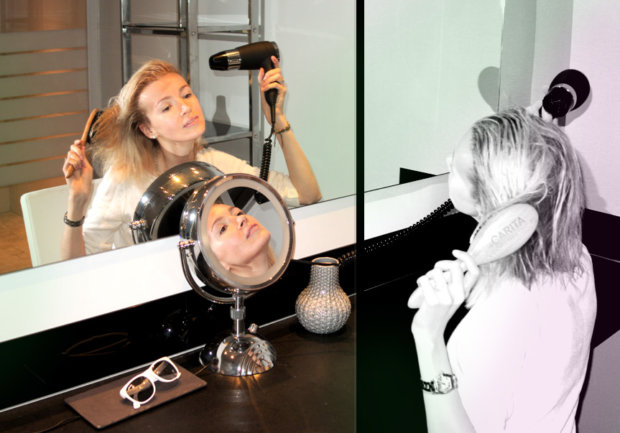 Drying my hair at the spa at Le Phebus

I had incredibly high expectations coming into this trip. I was even a little fearful that I might be disappointed given my lifelong hunger for this place. Thankfully, Provence managed to exceed all of my wishes and has certainly earned it’s reputation as one of the most beautiful places in the world. Even now, sitting back in my office, I can close my eyes and vividly recall the sights, smells, and emotions that Provence bestowed on this trip. I’m guessing it won’t be long before I’m back in the lavender fields giving this one-of-a-kind region another spin…

5 Things I Learned from Having Cancer
Read