Recently, the farm-to-table movement has taken off. But what does it really mean? Clearly, “eat local” means “support your local farmers”. But “farm-to-table” is a very open-ended term, and while it’s often assumed to mean humane or organic, it can just as easily mean factory farmed and GMO. “Sustainability”, although it has a relatively narrow definition, is a dangerously misused and unregulated term.

Shelburne Farms’ Mission: What They Do

Shelburne Farms is a working farm and luxury inn in Vermont, and the leader in farm-based sustainability education. Their mission is: “Educating for a sustainable future” and teaching tourists, kids and teachers so they will leave “understanding where food comes from”. The #1 thing they do is “offer learning experiences that inspire young people to make informed decisions to build a sustainable society”, and “big ideas of sustainability underpin all our education programs.” They hold “Education for Sustainability Summits” and are the “backbone organization” of the farm-based educational groups Farm-Based Education Network (with 2700+ members), the Sustainable Schools Project, and several other similar organizations. Which says to me: They should know better.

Shelburne Farms is the leader in America when it comes to educational agritourism. They’ve started a nation-wide trend of farm-based sustainability education.

“Educating” that the 1400 acres of rolling hills, where only 125 lucky cows get to graze, is “where food comes from”, or that it’s representative of what a “farm” that produces beef, sausage and other edibles is like, is akin to taking a foreigner on a tour of the top private school in Manhattan and leading him to believe that’s how education is done in America. Period.

In fact, teaching people that the animal farming at Shelburne Farms is anywhere close to “sustainable” is incredibly misleading. According to their most recent Form 990 (non-profit IRS form), their revenue from livestock products was less than $250k, while it cost nearly $4 million to run the farm. They need donations to sustain.

That gives you an idea of why almost all farms nowadays are factory farms, where animals are crammed into a concrete building so tightly that they need constant antibiotics to keep from getting sick. Not only that, but they give them growth hormones to make them grow freakishly and unnaturally fast so the turnover is higher. This is what they should be teaching people at Shelburne Farms.

In short, teaching people that this is “where food comes from” a destructive fantasy and, frankly, feels like beef-industry propaganda. If you think that sounds harsh, consider this: If you were a lobbyist for factory farmers, wouldn’t you do whatever it took to put a picturesque and “certified humane” farm like Shelburne Farms in charge of educating kids and teachers nationwide about “where beef comes from”? Me too.

As a side note, the Market Garden at Shelburne Farms grows produce (fruit and veggies) that is all organic. They do not use GMO seeds, herbicides or pesticides. Organic farming is the only eco-friendly and sustainable way to farm produce, and you can taste the nutritious goodness with every bite. 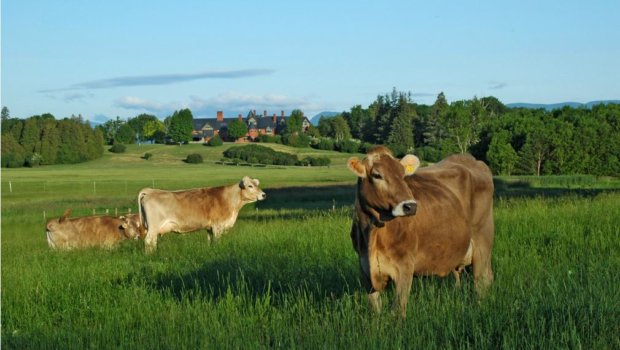 The “Happy Cows” at Shelburne Farms and Elsewhere

The secret truth of farming is that it’s pure fantasy to think that beef comes from “Happy Cows”. Even at Shelburne Farms, there is no such thing; and there certainly isn’t at the 99.5% of farms that are not “Certified Humane”, which is likely where your next steak is coming from. The truth is that in order for you to drink a baby’s milk, the baby has to be removed. That cereal, pastry or cheese is full of milk that was meant for some cow’s baby. Instead, the baby is removed from the mother, leaving both the mothers and their babies wailing for days and sometimes weeks, filled with separation anxiety. Then, the baby is killed (not on-premises; at Shelburne Farms they are slaughtered by a separate company), and his or her body is sliced up and put on a human’s plate to eat. That, ladies and gentlemen, is how you get milk, butter and cheese. (*more about all that)

One of the things Shelburne Farms is particularly naive about is the fact that telling people to be involved in their local farms is going to result in about 0.5% of the people they educate actually doing that. What percentage of people have the gumption or time to visit every farm before they eat every piece of meat, and talk to the owners to make sure it’s humane?

Imagine this: you’re at a dinner meeting at Ruth Chris Steak House. You decide you don’t care about asking where the beef came from in front of your boss or client, but the waiter says he doesn’t know. So you insist and the waiter asks the chef. They tell you it’s from a restaurant food distributor. So then you look up the company on the internet. They don’t say where it comes from (because it’s a hell-on-earth factory farm), so you call them, but they’re closed. Dead end. But seriously — what percentage of people would continually go through that effort, especially with so many dead-ends? Besides, even if people had the will to ask, websites can be decidedly misleading and waiters can be decidedly ignorant. 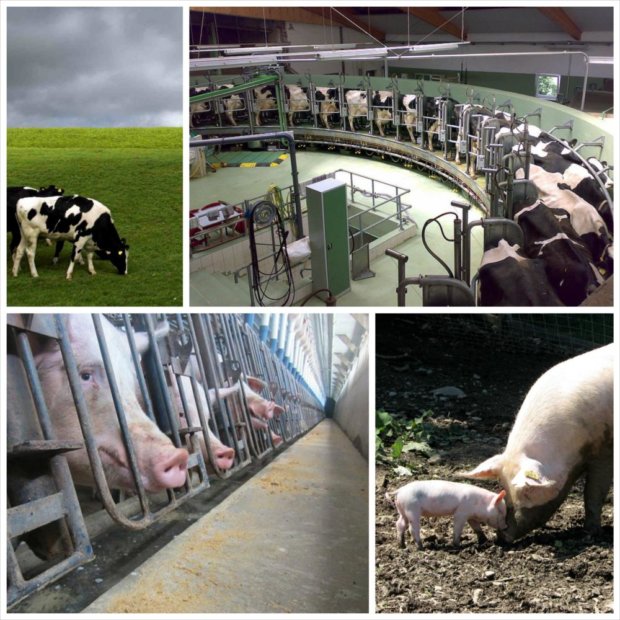 A Truly Sustainable, and Humane, Future

If it were up to me I’d change their educational programs to be about the sustainability of plant-based, beef-less, and organic diets. I’d teach people about how GMO pesticides are poisoning people and destroying our water and fields. I’d tell the hundreds of people they influence daily that the easiest and most effective thing that we, as human consumers, can do to support sustainability is to stop consuming cow flesh and milk. Now, I know that sounds extreme, but hear me out. These are the alarming facts about farming, and what I’d like to see Shelburne Farms start preaching:

See? Raising cows works out to actually be the direct opposite of sustainable or eco-friendly farming.

According to the American Council on Renewable Energy, at least 100 farms across the country are doing something truly sustainable – something which should be not only taught at places like Shelburne Farms, but practiced. These farms are cow manure-powered facilities. Yup, you read right. They use about half of the manure (ie. poop and urine) that would otherwise pollute, and convert it not only into more than enough power for their entire farm, taking them off the grid, but often enough to sell back to their county. These farms are being touted by politicians as a way to curb nitrate levels and water pollution, and a produce renewable green energy stream.

“(The system) might be a breakthrough, a breakthrough in a challenge that has faced the dairy industry throughout this country and in California,” California Democratic Rep. Jim Costa told the Merced Sun-Star. “What we’re really talking about here is protecting water resources, protecting the air quality and climate and creating a renewable energy stream,” Costa added.

It would seem to me that the “big ideas of sustainability” that Shelburne Farms says they teach “educators and schools” both on their “farm-campus” and off-site “that inspire young people to make informed decisions to build a more sustainable and just society” should be, simply: “Go vegan!” 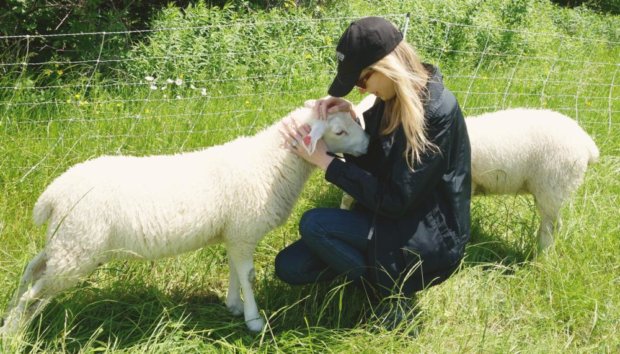 Shelburne Farms recently released a cookbook for schools that is full of seasonal and meatless meals. Their marketing talks about educating people about “sustainability” and “the change we want to see in the world”. Perhaps this is the first step in Shelburne’s gradual conversion to an animal sanctuary where they educate about the true reality of farming, and how we can all do our part for a truly sustainable society by consuming less meat and eating organic — and knowing why we’re choosing to do so. Now, that’s something I would want to donate to!

With the Internet and social media spreading the real facts about all types of farming, and plant-based/meatless diets being the fastest-growing segment of the food industry, this kind of thinking is the only future our small planet can afford.


…a ground-breaking film that has gotten rave reviews (you can watch it on Netflix):