What it’s like to be women in charge of a massive candy empire.

Smarties. Loved and recognized by millennials and boomers, it remains one of the most iconic All-American candy brands.

If you grew up anywhere in the USA, odds are you’ve gone into more than a few sugar comas thanks to this delicious candy. 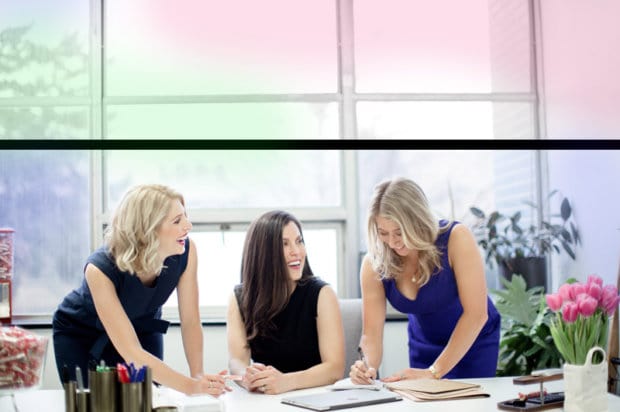 Seeing as it’s Halloween, it’s a perfect time for you meet the three inspiring women who run Smarties Candy Company: Liz Dee, Sarah Dee, and Jessica Dee Sawyer. Liz is like a sister to me, and she never ceases to inspire me. Given that we’re besties, I was able to convince her, her sister and her cousin to take some time out of their uber-busy Halloween-season schedules to have a chat with me to let Urbanette readers in on their thoughts about leadership, being women in business, and to share their refreshing and modern perspectives.

Hilary: It’s very unusual to see three women as co-presidents of such a massive company. What are some strange/funny responses you have had to being women in business?

Sarah: I recently had a friend from high school ask me if the three of us co-presidents still answer to an older man who is actually in charge. He couldn’t believe three young women are running such a successful company.

Hilary: Wow. How did you respond to that?

Sarah: I said “Nooooo the buck stops with us. We do not answer to a man.” And everyone at the table laughed at him for asking such a ridiculous question.

Liz: I wish I had been there. I cannot believe he said that. But the fact that he did means he’s probably not alone in thinking it. 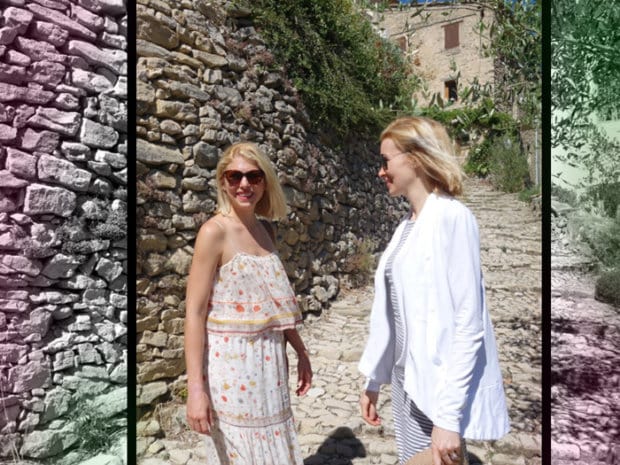 Liz and I on vacation together in Provence last year

Hilary: Yes, the fact that he said that shows how far we still have to go in shaping people’s views of women in business. That’s why I want to write about your team… it’s very important for other young women and men to see that this is the new normal.

Jessica: If someone doesn’t want to work with us because we are women, we will find plenty of other people who will work with us.

Liz: We need adequate representation of women in leadership positions. Growing up, we looked to our dads, but our family’s next generation will be looking to their mothers as role models in business. 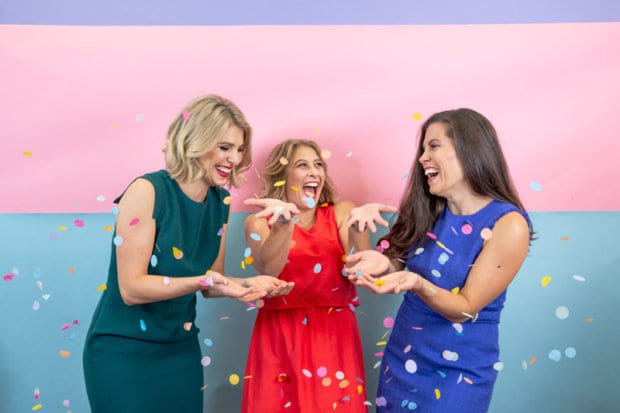 Hilary: So each of you grew up with stay-at-home moms? That’s interesting because none of you chose to do that.

Sarah: Even though our mothers were stay-at-home moms, they are very strong women.

Liz: I think there’s a stigma still about stay-at-home moms that isn’t fair or true. Just because they aren’t compensated for their work doesn’t mean they aren’t working or that their work isn’t valuable!

Hilary: I totally agree! Running a family should be seen as similar to having a full time job.

Jessica: Especially now that Sarah and I are both parents, the thought of being a stay-at-home mom is more daunting than coming to work at Smarties!

Hilary: I love that despite how large Smarties is, it has remained a family-run business. Instead of hiring an outside CEO, your dad’s put their daughters in charge.

Jessica: It was a very smooth transition because we did it over such a long period of time. We still talk with them regularly.

Liz: Our dads are feminists, and so is our grandfather. They were our biggest supporters. They didn’t have to keep it a family business. They chose to. 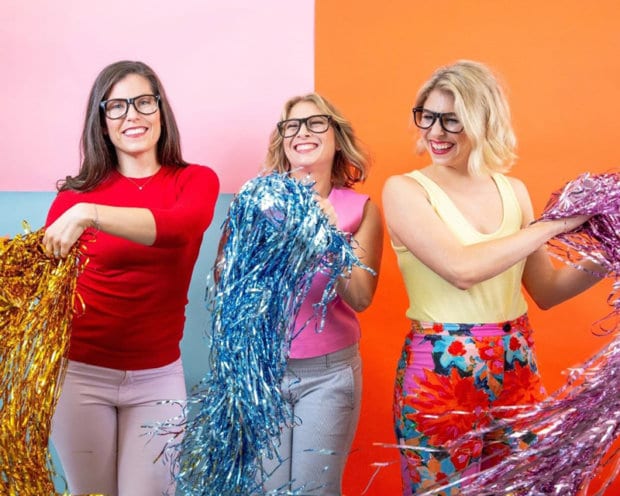 Hilary: Exactly. What do you think helped your dad’s be so open-minded to installing three women to run the company, compared to ‘most men?’

Jessica: Their parents (our grandparents) were open minded, well traveled, well educated. Their sons were taught to respect everyone.

Sarah: Our dad’s were hippies who went to Yale, and we had a strong professional grandmother who worked hard, broke glass ceilings, and got her PHD after having three children.

Hilary: Wow, that’s very impressive! Were you close with her? Did she give you advice?

Sarah: We were all incredibly close to her. She gave us lots of advice.

Jessica: Nana taught us to believe we could do anything.

Sarah: She was a big believer in us.

Liz: She was incredibly loving and supportive. 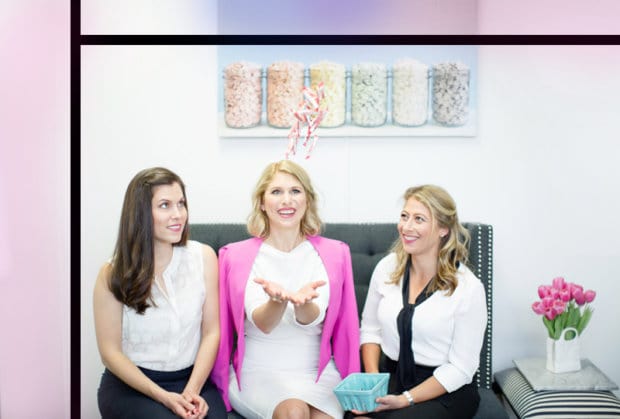 Hilary: Do you think she purposely taught the men in your family to see women in a different light?

Jessica: Absolutely. She was the only woman in her family as a mother of three sons. She was the “mother lion.” She set a strong example for her boys. A lot of that was seeing how powerful and important women are. All of her boys learned that early on.

Sarah: It was very important to her to make sure she was giving her sons the best female role model she could.

Liz: By seeing her self-actualize, her sons learned more through her example than they ever could have through words.

Hilary: Totally. It’s so important to have strong women as role models — for both women and men. Besides being a role model to other women (which you all clearly are), why is it meaningful/important to you to be not only executives, but women executives?

Fear isn’t a “bad sign,” in fact it can be a good sign. You won’t get anywhere if you stay inside your comfort zone.

Sarah: I wouldn’t say being a woman executive characterizes who I am. I’m an executive.

Hilary: That’s a great point. I am looking forward to a time when people aren’t differentiated by their gender in the business world. You three are paving the path for that future.

Jessica: I want my daughter Madeleine to not think it’s unusual to have a mom who runs a company. I want her to see that her mom runs a business with her two aunts and that this is a normal thing.

Hilary: Exactly! What do you think needs to change in order for that to be more common? It seems to be a pretty systemic problem, so I know that’s a really broad question…

Liz: The change is happening. Sometimes it’s hard to see it, but it is happening. Even in our family of feminists, this is the first generation that the family business is run by women. 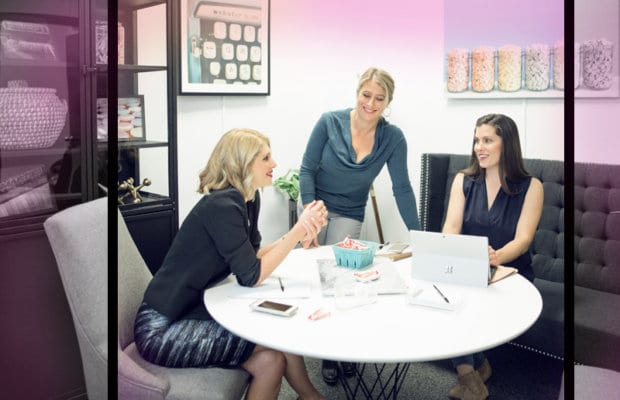 Sarah: The point is that women can do anything that men can do. It’s not about supporting something just because of women vs. men, it’s about removing the boundaries so that they can have the same opportunities.

Hilary: Liz – I’m super impressed with the Vegan Ladyboss organization that you founded. It’s having a big impact helping vegan women around the world become successful in business. Isn’t it hard finding time for mentorship when you’re busy running not only Smarties, but Vegan Ladyboss and your venture capital company, Baleine & Bjorn Capital?

Liz: I started Vegan Ladyboss to empower women to thrive. Through this network and outside of it, I mentor women in business. It can be challenging to say “yes” to everyone who wants to get coffee, but I started scheduling mentorship calls during my daily commute and that has been an efficient way to fit it in.

Hilary: That’s really cool! I attended one of your meetings (and can’t wait to go to another!) I was really impressed by the community you’ve created and how large it is. It’s also really helpful for connecting women in business.

Liz: Thank you! Vegan Ladyboss has been growing in a major way. We are several thousand strong and expanding rapidly. 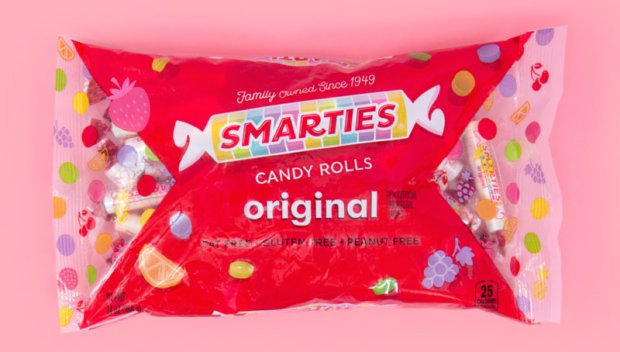 Hilary: What’s some of the best advice you’ve ever gotten?

Liz: Some of best advice I’ve ever received is from our grandfather Edward Dee (the Smarties founder). He told me in his behavior, not his words, to never ever EVER give up. He has true grit, and I think that is so important in business.

Jessica: Double check your work. I like the “measure twice, cut once” mentality.

Sarah: People can’t read your mind. Clear communication is key in order to get the results you’re looking for.

Hilary: Is there anything you wish you’d done differently, in life or work?

Sarah: I don’t have any regrets. Everything is a learning experience. I try not to get bogged down in anything negative that I know I can’t change.

Hilary: Sometimes it’s hard to know what is changeable, and how to go about trying! By the way, I love the new Smarties rebranding. It looks very chic and fresh! I’m obsessed with the new design of the Smarties Instagram!

The original design (above) and the reimagined packaging (below)

Jessica: Thank you! It took over a year. I think people don’t realize how much work goes into something like that. Our goal with the brand/packaging refresh was to deliver what people know and love about the Smarties look while updating it in a fun and refreshing way to feel modern. We want it to still be familiar and recognizable.

Liz: I think we achieved that.

Hilary: You definitely did. It looks super hip, but still has that classic nostalgia. Not an easy thing to pull off!

Hilary: What advice do you give to other women in business who want to take on more responsibility and advance their careers?

Sarah: Don’t be afraid to be the only woman in the room! Speak up and make sure your ideas are heard and show what you are capable of. Don’t be scared to ask a question. No one knows everything and no one expects you to know everything.

Jessica: Know you are not alone and if you need help, ask for it. Don’t be a martyr. Women and men in your life can assist you, but you have to ask. There are people who want to support you. Let them.