My Viking Cruise: Hanging in the Mediterranean

Join me as I travel to Venice, Croatia and Corfu on a Viking Cruise of the Mediterranean Sea.

If you caught my last article, you know all about the Viking Cruise that I’m currently on. If you missed it, you can check it out here.

On our first night, shortly after getting settled in our stateroom (that’s what they call the rooms on a cruise ship) and having a room service meal on our balcony, we walked into town and explored the streets of Venice. The city has a lovely feel in the evening, particularly when you gaze upward through the quaint narrow walkways and see the stars twinkling above you. 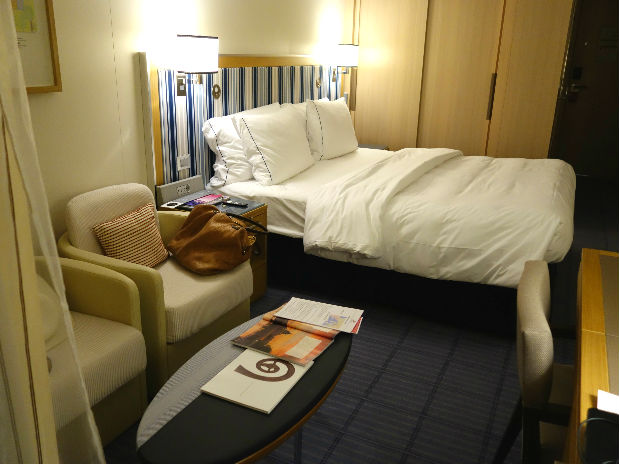 Our stateroom, on our first night (before we cluttered it up)

After our two-hour stroll, we arrived back on the boat to find some of our fellow shipmates partying to a great band in the Torshavn lounge, while others were relaxing by the bar in the Explorer’s Lounge, listening to a wonderful pianist. 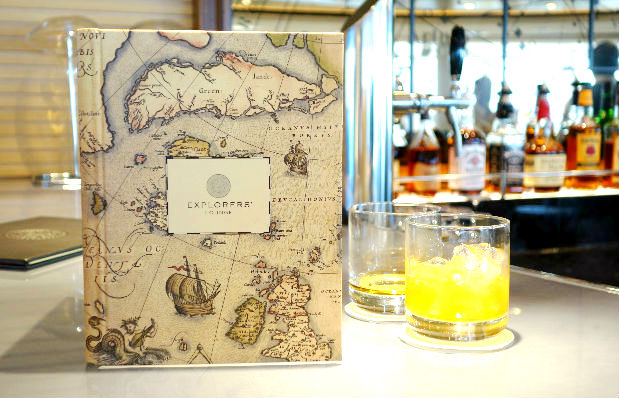 The following morning, we got shuttled into town with about 50 other passengers, and our tour took us through some of the more touristy areas of Venice. We used our wireless headsets to hear the guide, which was convenient, since we opted to duck into the shade as often as possible.

During the tour, I learned that Venice was built on top of 117 small, marsh-like islands. So every time you cross a bridge in Venice, you’re stepping onto another island. Amazingly, the building of Venice are held up using wood. Because there wasn’t any oxygen in the thick muck that Venice is built on, when they stuck trees into it they petrified and became very strong. The buildings are mostly built using clay bricks and timber, and were designed to be flexible as the ground shifted. So while the buildings may lean, they will never fall. Venice was the first republic in Europe (France was the second, after the French Revolution). 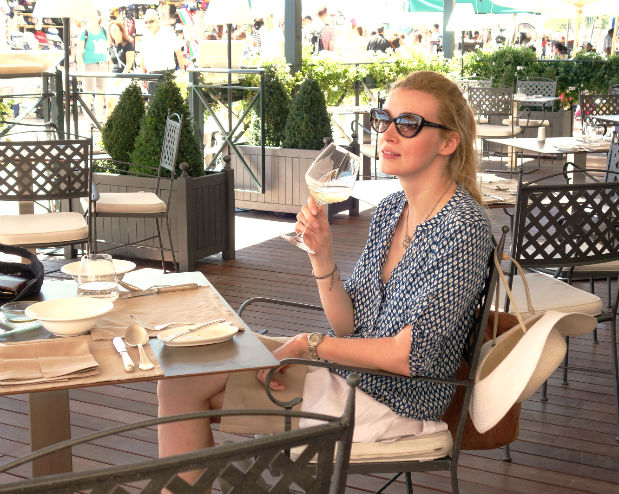 Lunch at Do Leoni, in Venice

After the tour, we treated ourselves to lunch at a Relais & Chateaux restaurant right on the water, called Do Leoni. Finding the Viking water taxi after lunch was simple, as there were Viking reps in red all over the place. When we got back to the Viking Sea ship, we went to the Explorer’s Lounge on the front upper deck (one of the many lounges, with live classical music, to choose from) and ordered a Bergen’s Kaffe.

In the following days we visited Split and Dubrovnik, in Croatia. I had no idea what to expect when we arrived in Croatia. When we woke and pulled back the drapes to our private balcony, I was shocked by the incredible beauty of the town and surrounding mountains. The towns are filled with history and, although crowded with tourists, were super charming. 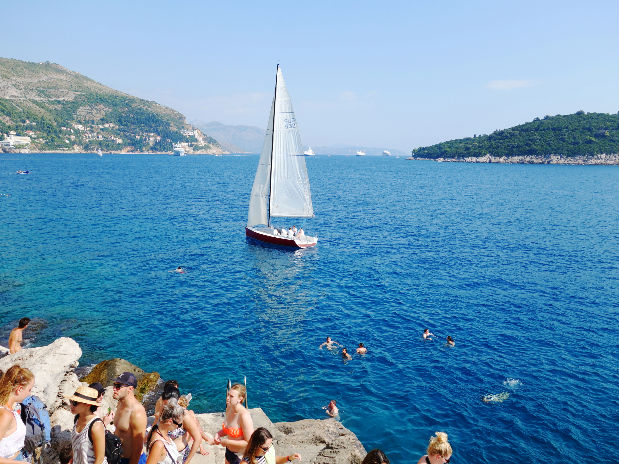 We ducked away from the crowds and found a few off-path nooks (usually through a small tunnel in the side of a stone city wall) where we could hang out on the side of a rocky cliff and get a drink, lunch, and swim in the crystal-blue waters. 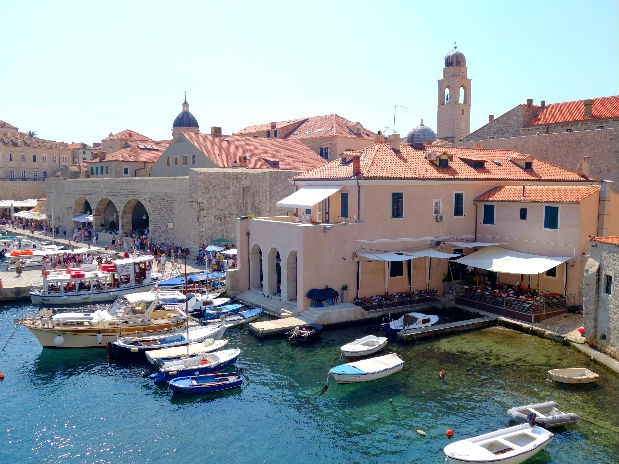 There are a lot of great restaurants to try out in Split and Dubrovnik. We especially loved one in Split called O’Zlata (which means “of gold” in Croatian), which is housed in what was the 15thC royal residence of Roman emperor Diocletian. We sat in the courtyard, but the interior is equally as charming and they had lots of healthy vegan options made from fresh local ingredients, including smoothies and fresh squeezed juices. If you’re staying overnight in Dubrovnik, make sure to have dinner at 360 Restaurant, which is super romantic and has incredible –you guessed it– 360-degree views. 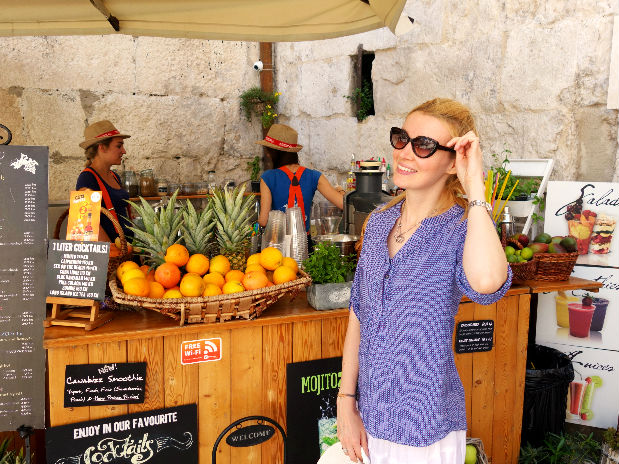 Getting some fresh juice at a stand in Dubrovnik, Croatia

Yesterday we stopped in Corfu, Greece. I was expecting the white buildings I’ve seen in photos of islands like Mykonos, but the architecture in Corfu reminded me of the Caribbean and wasn’t at all what I expected. All of the main streets in the downtown area were packed with tourist stalls selling cheap jewelry, sun hats and trinkets. It felt like a shopping maze reminiscent of Marrakesh’s souks. 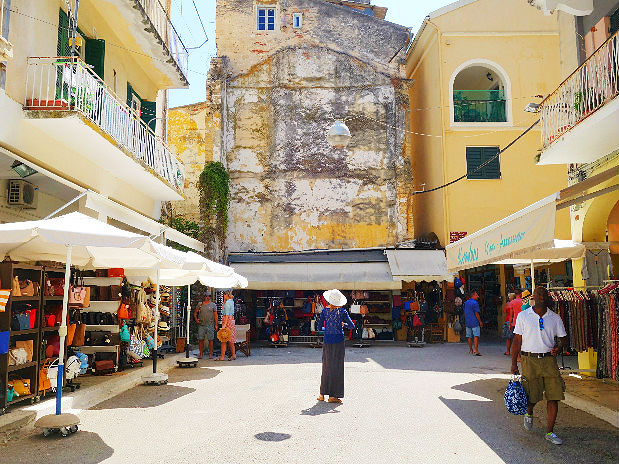 Me, in the middle of Corfu’s shopping maze…

I also wasn’t expecting to see so many sick, stray cats wandering around and hiding in the many abandoned buildings. Litter was everywhere and I ended up crying after spotting a dead cat in a pile of broken glass. 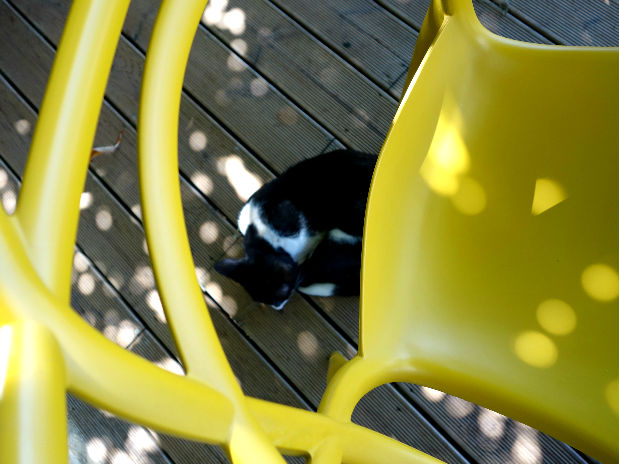 One of the many stray cats that nobody seems to be looking out for. This skinny little guy curled up under our chair.

It was really sad to see the toll that Greece’s economic situation has taken on Corfu, its inhabitants, animals and buildings. It’s clear that it was once a utopia of sorts, with its beautiful and hilly island landscape, impressive stone fort, built-out harbor and clear blue waters. Hopefully their economy will recover soon and they will put in place a spay-and-neuter program to help the cats. Until then, I’m not sure I could bear the emotional burden of another visit to Corfu.

We stopped at a bar called Imabari, by the sea. Mike got into his swim trunks and took a swim while I video chatted with my parents on my phone. There were a few cute restaurants nearby with absolutely stunning views, but we opted to go back to the ship for dinner. After all, it’s uber-comfortable, the food is delicious and free (included in the cruise price), and we know what we’re getting onboard is clean and fresh. 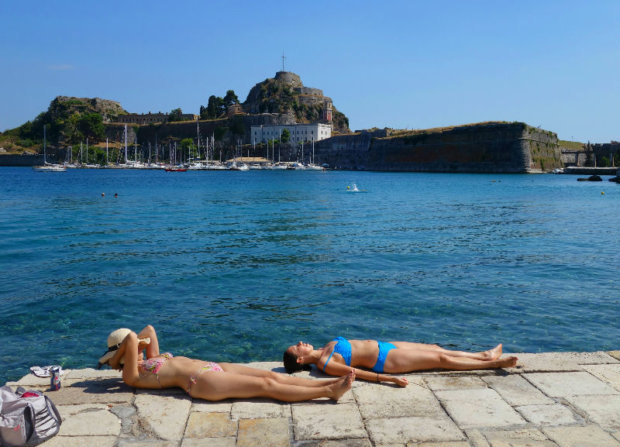 Each day, before heading back to the shuttle bus, we stop at a local tourist shop and pick up a cute magnet with the city or country name on it. While onboard, we’ve made friends with another journalist couple our age (one of the five or so couples under 50 years old), and they collect magnets from every country they travel to together. We thought that was a charming idea.

Maybe later we’ll try afternoon tea at the Wintergarden, hit the gym, check out their Snow Grotto, and take a dip in their glass-backed infinity pool. I can’t wait!

Welcome to My Mediterranean Odyssey!
Read