Weddings from Around the World

Add some spice to your ‘I do’ with an exotic wedding theme.

At the core of any Iranian wedding is the traditional spread (sofreye aghd), a dazzling presentation with ancient Zoroastrian roots that symbolizes each facet of marriage and married life. When I was planning my own wedding, I was worried how I might incorporate this elaborate spread into a North American wedding, but it worked wonderfully as a focal point for the aisle and ceremony itself. 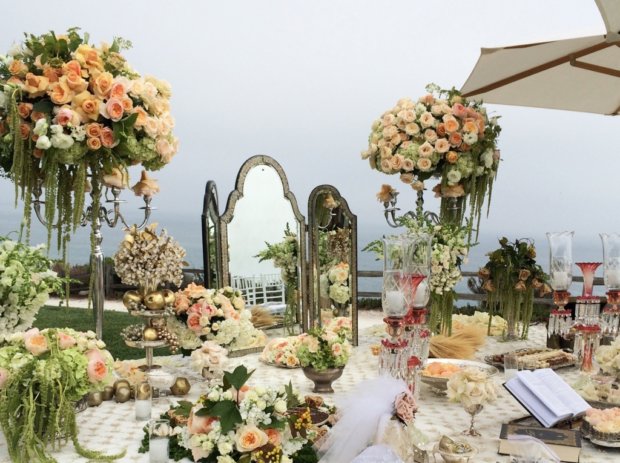 The concept behind the spread is similar to the “something borrowed, something blue,” where the items are symbolic and lucky. There is a mirror and two candelabras placed at the head of the spread to symbolize the light and fire of life. Seven is a lucky number in the culture, so there are seven traditional herbs and seven pastries to represent a “sweet” life. Decorated eggs symbolize fertility, coins represent prosperity, and simple feta cheese and herb sandwiches (naan-o paneer-o sabzi) represent the basic necessities of life and are offered to guests after the wedding ceremony.

One Iranian wedding tradition that might be fun to tweak for a wedding shower is that during the ceremony, female family members are asked to come up and gently grind two large sugar blocks over-top of a veil placed above the seated bride and groom – spreading their luck in love to the couple. For a wedding shower, instead of the couple, it could just be the bride-to-be and while the women grind the blocks of sugar, they can impart some wedding wisdom.

A Tour of Historic Rome
Read