Unlike most women of her era, Elizabeth Magie supported herself and didn’t marry until she was 44. She worked various jobs and spent her leisure time performing standup comedy and creating a board game that was an expression of her strongly held political beliefs. 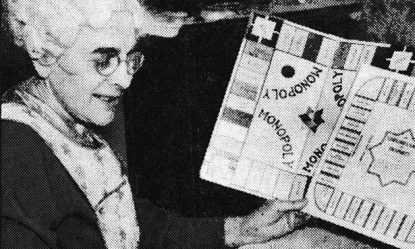 She was in her 30s when she applied for a patent for her game in 1903, after years of developing and revising the game. She represented the less than 1 percent of all patent applicants at the time who were women. (Elizabeth also dabbled in engineering; in her 20s, she invented a gadget that allowed paper to pass through typewriter rollers with more ease.)

In 1904 she started producing her board game, which she called Landlords as a criticism of capitalism and land monopolism. She had created two sets of rules for her game: an anti-monopolist set in which all were rewarded when wealth was created, and a monopolist set in which the goal was to create monopolies and crush opponents. Her dualistic approach was a teaching tool meant to demonstrate that the first set of rules was morally superior. 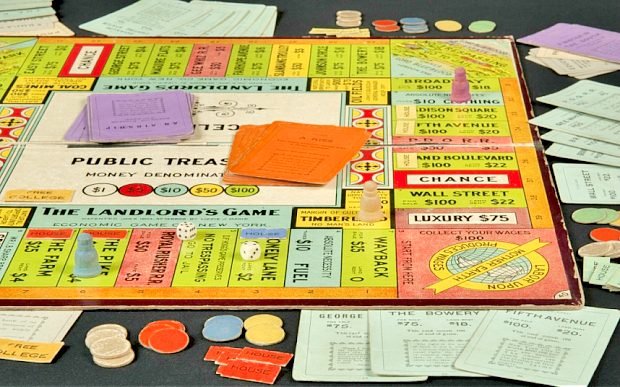 In an ironic twist, Charles Darrow stole the idea from her and sold it to Parker Brothers as Monopoly. He got all the credit, but now we know that all those game-night family feuds were really thanks to Elizabeth Magie. The completely fabricated tale, repeated for decades and tucked into the game’s box, was that an unemployed man named Charles Darrow invented the game in the 1930s. He sold it and became a millionaire, his inventiveness saving him — and Parker Brothers, the beloved New England board game maker — from the brink of destruction. It’s a great ‘American Dream’ story — except it isn’t true.

As they realized that the game would be a success, Parker Brothers convinced Elizabeth to accept $500 for the patent for The Landlord Game and two other games she created, with no royalties. She had no idea that other game inventors had gotten paid much, much more for their inventions, or that Parker Brothers would do their best to erase her name from history.

The New York Times reported that, in a series of 1936 interviews, she expressed anger at Darrow’s appropriation of her idea. Then elderly, her gray hair tied back in a bun, she hoisted her own game boards before a photographer’s lens to prove that she was the game’s true creator. “Probably, if one counts lawyer’s, printer’s and Patent Office fees used up in developing it,” The Evening Star said, “the game has cost her more than she made from it.”

In 1948, Elizabeth Magie died alone, in relative obscurity and relatively poor. Neither her headstone nor her obituary mentions her role in the creation of Monopoly.