Eating Whitebait and Getting Mugged in Barcelona

What happened when I, and a group of my best girlfriends, went to Barcelona for a little fun.

Vacations: we all love them. Some of them are simple; others…. are spectacular. Whether you’re traveling to Portland or Paris, vacations are something to cherish. This year I was lucky enough to go to Barcelona for a few days.

Ah, Barcelona. When I first purchased my tickets, all my friends said the same thing: “Be careful. Everyone I know who’s been to Barcelona gets pick-pocketed.” Whatever, party poopers!

There we were; Me, and four of my best girlfriends, on a flight to Barcelona. Having never been there before, I was pumped to explore this amazing city and all its history. Since traveling is best done on the fly, I decided to go with no itinerary. This, to me, was the best way to travel. With the help of a handy Lonely Planet book, there was no need to schedule anything. Barcelona, get ready! 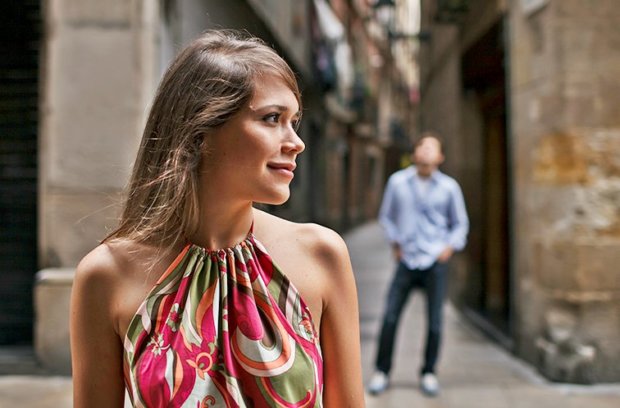 When we first stepped out of Barcelona El-Prat Airport, my body rejoiced. New York was in the low 50’s, so arriving ditching the chilly NYC weather and slipping into the mid 70’s was simply divine. Sure, it’s not like I was in Mexico or anything, but at least I wasn’t dodging snowflakes! It was so nice to trade my heavy wool coats for pashminas, shorts and tights. I was pleased my sense of style had returned, however, the Spaniards were not. The locals, still decked out in their warm jackets and boots, were all glaring at me as if I’d been drinking too many sangria’s…. 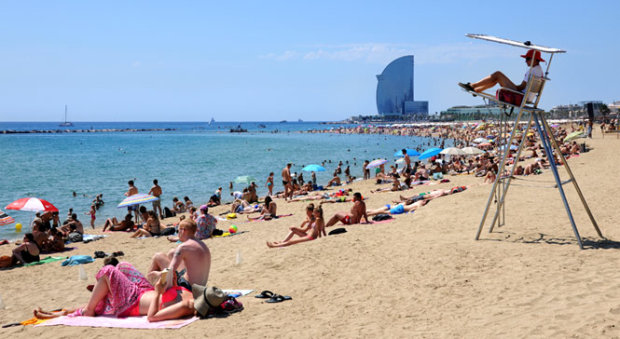 Barceloneta Beach, with the W Hotel in the background

Since I hadn’t planned anything, my friends took the responsibility of playing tour guide, relying on our trusty Lonely Planet book. First, we first hit Barceloneta Beach. Sandy beaches as far as the eye could see, waves crashing onto the shore and beautiful sunshine…it was worth the trip.  I was admiring the W Barcelona hotel in the distance when all of a sudden a more intriguing view came into sight. A naked man, in his 60’s, was strolling past us with a bright smile on his face. Here I stood, in my jacket and leggings, opposite an elderly man with nothing but his package. I tried to be mature and look away, but my childishness got the better of me and I giggled out loud.

Feeling as if our time at the beach has just peaked, we pushed off for more of the city. As our day continued, we went on to view many other glorious sights such as La Sagrada Familia, Park Guell, and Casa Mila; all of which were designed by the one and only Antoni Gaudi (a Catalan architect whose distinctive works were found mostly in Barcelona). We gawked over the dark beauty of his style (Gaudi’s buildings seemed very Gothic to me) and then did what we did best: took countless unflattering photos that would not do any of his works justice.

We were now famished, so we decided to refuel. We ate as the Spaniards ate. We had tapas for every meal. We devoured everything, including the dish that almost severed our friendship, as everyone was fighting over the fried whitebait. These little fish (reminded us of anchovies) were fried an appetizing golden-brown, and served with a dash of lemon juice. Our waiter had recommended the dish, and all of us inspected it carefully before diving in. Within minutes, we were ordering more. They might have tasted better with beer, but this was Barcelona! Instead, we washed our food down with white sangria. De-lish!

Not only was the food lovely, but so was our Spanish waiter. This handsome and flirtatious stud in his twenties told me repeatedly that I was “extremely beautiful” in English, and between him and the fried whitebait, I couldn’t decide which I liked better. Happy as a clam, I took note of the fact that none of us got pick-pocketed…..yet.

The subway in Barcelona

We were now on the train back to the hotel. Our group of six got separated in two carriages. It was close to midnight, and the train was getting packed. I found myself in the last carriage with one of my other friends. As I nestled against a pole, I heard her shout, “Hey!” I turned to look, and saw a group of well-built men, all dressed in black leather, surrounding her. My friend had her hands in her pockets, trying to elbow her way out from the group. I wanted to help – but I stood transfixed. She managed to squeeze her way through and ran out to the platform. She shouted my name, and I ran out after her. My sister and our friends who noticed the commotion also came out of the train. So did the group of men.

I knew if a fight broke out among us, we would lose for sure. We were no match for this group of men, and the train conductor knew too.

The train didn’t leave. After a death stare match that felt like forever with the men, they finally walked away but not without leaving their mark, as tiny pieces of glass surrounded us when one of them threw a beer bottle at our direction. Thankfully, none of us were hurt. We asked our friend what exactly happened and she told us they were feeling her up as they surrounded her. We didn’t know if it was a Lonely Planet tip or if our friend was just cautious, but keeping her hands in her pockets was a smart move. If she had taken them out to maneuver, the men would’ve stolen her phone, camera, and passport, which were all nestled in her jacket pocket.

Once we were back at the hotel, we thought about our narrow escape, feeling a little shaken from the experience. I thought about our trip, and while had loads of fun stories to share, I knew I’d always be starting off with: “Be careful. Everyone I know who goes to Barcelona gets pick-pocketed. We almost did.” But besides the incident on the metro, our trip was perfection. Overall, Barcelona is incredible- and I can’t wait to go back. With the culture, the sights, the drink and naked men walking around, how could a woman not love this city?! Just hope that on your next trip here, the naked man isn’t in his 60’s 🙂

Have you had an experience like this? How do you stay safe while traveling?

I hold a bachelor's in magazine writing and an associate's in fashion merchandising management at Fashion Institute of Technology, New York. My love for fashion has led me to several opportunities in the industry including but not limited to styling, writing, brainstorming, producing fashion shows, and public relations.

How To Stop Apologizing
Read

Lethal Lipsticks: What You Need To Know
Read