Should I give him an ultimatum?

My live-in boyfriend and I have been seeing each other for about a year and a half, living together for somewhere around six months. I’m 31 and my family is giving me a hard time — like I should just go ahead and move on if he’s not going to be the one because I’m wasting time. My best friend even says to me that there’s no way he’s going to marry me because he’s getting all the sex of a non-married relationship without the commitment. I’ve debated a lot about giving him an ultimatum or a deadline, but something tells me that’s a bad idea. How will I know if he’s ever going to be ready to make the next step? 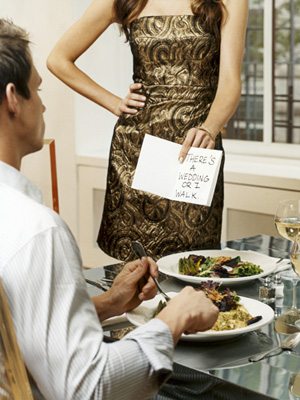 You may think that men are afraid of the marriage commitment because we want to leave options open, because we’re waiting for something better, or because we fear it’ll be the official end of hot-tub sex. Jay, 30, says a man’s hesitation isn’t about indifference; it’s actually the opposite. “Men are just as unsure about the relationship thing as women,” he says. “I’m getting married in a couple months to a woman I love deeply, who I know will be a fantastic wife and mother to my future children. Is she my soul mate? Tough question, but if not, she’s pretty darn close.” When we decide we want to be married, we want to do the right thing — for both of us. So should you give him an ultimatum? I don’t think so. If you’ve been honest with him about your feelings for him — for him, not for “the relationship” — then you’re probably at the point in your relationship where you should be able to ask him straight up about his feelings for you. If he can’t tell you what he thinks and what he feels, well, that’s probably your answer.