Why Some Women Die During Their Period

Having a period already sucks. Now imagine if you had to do this too…

If you thought bleeding from your nether regions for a week every month was bad, imagine if you had to spend this week sleeping on the hard floor of an outdoor hut… 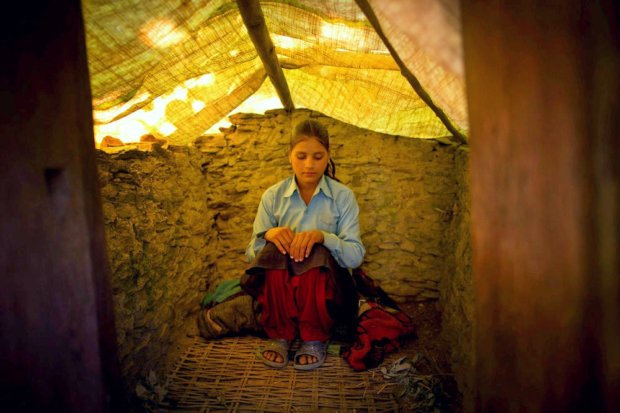 In some regions of Nepal, this is a reality. The villagers who practice this tradition, known as ‘Chaupadi’, believe that a menstruating woman will anger the Hindu gods or contaminate the home if they remain indoors when Aunt Flow comes to pay a visit. They go each night to their “menstrual huts” for fear that livestock or family members may get sick or die.

In the west Nepal village of Timalsena, 26-year-old Dambara Upadhyay was no exception. On November 18th, 2016, Upadhyay slept in a menstrual hut, and on the morning of November 19th, she was found lifeless. This is certainly not the first time that a woman has died in a menstrual hut, but it marks the first time that the prime minister requested an investigation of the incident. Almost exactly one month later, overnight on December 17th, a 15-year-old died when her hut burned down.

Despite the dangers, it’s not hard to see why this superstitious tradition continues. If, for generations you’ve been told that the evacuation of hemoglobin from your lady parts was connected to the death of your grandfather, you would be pretty quick to seclude yourself in an outdoor hut as well.

The practice has been outlawed since trucker hats were a thing (2005 in case you’ve wiped that tacky trend from your memory), but like many regions where modern life (and trucker hats) have yet to infect the populous, the tradition has continued. And even though Chaupadi was outlawed 11 years ago, there were no avenues put in place to prosecute violators, so the practice carried on unhindered. Following Upadhyay’s recent death, the Nepal Ministry of Women, Children, and Social Welfare has vowed to nip the issue in the bud by enacting laws designed to punish families who practice Chaupadi.

But, in the nearby district of Jumla, one man is attempting to change the practice another way. Through his organization, Surya Social Service Society, which promotes safe menstrual practices, he persuades local families to set up a secluded room inside the house for a woman to spend her time of the month, instead of a hut outside. Model families who have done this are then used to demonstrate to other still-suspicious families that grandpa will live to see another day, and that the crops and the livestock will keep producing as per usual.

To get involved in spreading awareness about menstrual health and save women’s lives, contact the Surya Social Service Society.

Related ItemscausesCharitynepalwomen in the world

One Crazy Night in Mexico
Read

How Messed Up Lessons From Disney Films Affect Us
Read